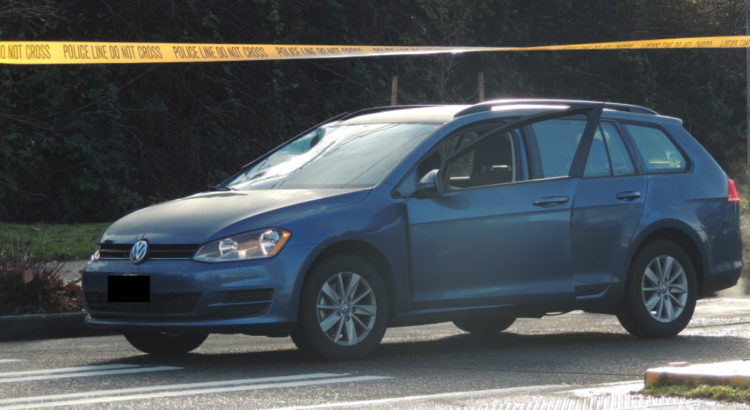 Updated: A tragic accident along Seaview Ave. early this morning has left a bicyclist dead.

At 4:30 this morning, police and medics responded to the 7000 block of Seaview Ave. — near the Shilshole Bay Marina — for a collision between a car and a man on a bike.

Seattle Fire attempted to revive the bicyclist, but he was declared dead on the scene.

The driver was evaluated for any signs of impaired, but none was detected, Seattle Police said. He was interviewed and released at the scene. Photos shared with My Ballard by Lucas Bonnema, who arrived after the crash, show the vehicle stopped in the middle of Seaview Ave. just short of a crosswalk.

The Burke Gilman Trail runs parallel with Seaview Ave. There are streetlights along Seaview, but it can be dark in spots at night.

Seattle PD says its traffic detectives are investigating. (Thank you Lucas for the photos.)

Have they identified the bicyclist? Just hoping it’s not a certain person

Those boat owners drive way to fast along that stretch. Maybe the road is designed too highway-like, but I see lots of cars speeding through here.
This person was obviously going too fast if they couldn’t see the bicyclist in the road. Or they were looking at their phone. Or both

@ Emily ever hear of this thing called libel? Can you show us all of your data collected? Somebody is dead here, and If the authorities let the driver go, perhaps they weren’t at fault. Did this thought cross your mind, or is it better to throw bombs? That’s the media’s job to distort things! Curious, how at this time of the day they simply couldn’t miss each other. But go ahead and keep using that “broad brush” you have there. Next thing you’ll tell us this too is Trump’s fault.

@ Scott,
I have heard of libel and apparently you don’t understand it.

Somebody is dead here, and someone ran that person over with their car. I’ve seen plenty of accidents (yes, even fatal accidents where a bicyclist was hit by a car driver) where they ‘let the driver go’ only because there was no alcohol/drugs or malicious intent. If the person is texting and hits someone, they don’t exactly lock them up. A good friend of my family lost his life when riding his bike and hit in this manner and the driver got a $150 ticket.

@EMILY,
There is are multiple businesses people are employed at, a very large condominium building, very popular beach, park, workout area, and access to Sunset Hill and a dog park which passes past the marina. Please don’t assume it was “those boat owners”. And no they weren’t “obviously” going too fast and you have no idea if someone “ran that person over with their car”, especially since the police characterized it as a collision. There are two new crosswalks and I’ve seen people on bikes come down the bike path at a good clip and then make an immediate sharp turn onto the crosswalk which places them directly in the path of oncoming traffic. Bicycles don’t have turn signals and the cyclists just assume people are going to know they are going to cross the street instead of continuing on the bike path. Speculation is fine but please don’t make public assumptions about groups of people and things you know nothing about.

A couple of corrections for your article:

Bicyclist killed in *crash* on Seaview

A tragic *crash* along Seaview Ave. early this morning has left a bicyclist dead.

for a collision between a *man driving a* car and a man on a bike.

Photos shared with My Ballard by Lucas Bonnema, who arrived after the *crash*, show the vehicle stopped in the middle of Seaview Ave. just short of a crosswalk.

@Sean The gender of the driver was not released. We understand the debate over the language, and we made a couple changes.

There’s a shopping cart in the middle of the street. Is it connected the accident?

Is it at all possible that the car wasn’t at fault? Sometimes bicyclists can be aggressive or reckless…

I will point out that at 4:30 am it is still dark out…also, there is a separate bike path that runs parallel to the street in this area. As the vehicle driver was released it appears the officers did not find sufficient evidence to indicate the driver contributed in this tragic accident. A person on a bike is vulnerable…they have no protection around them, and it up to them, ultimately, to ride with care and caution, regardless of who has the right of way, as they will pay the greater price in any dispute with a vehicle. (Please note I cycle, and believe it is better to yield than die).

I drove by the scene about 7:30 a.m. on Sunday morning and the man’s body was still lying in the street with a yellow blanket over it with his feet exposed and he looked very cold… but I saw no bicycle and no car just police and the dead body, and it was very disturbing, and I still am a little shaken by seeing it, and I hope all concerned take care in their lives whether driving a car or riding a bicycle as life is precious and fragile and can end so quickly…

Drug pushers Conducting Uncivil war on community with impunity as community implodes as curmudgeons of industry care less about another cyclist getting in umsafe.drivers.way probably on something or doin something that would justify some kinda ticket.

My wife and I came upon this scene on Sunday morning between 7:30-8:30AM. The comments in this thread contain speculation and assumptions.

This is what we saw: A vehicle with windshield damaged on passenger side. A body under a yellow tarp. A backpack near the crosswalk. A shoe in the road. A bicycle near the bike/pedestrian path.

There were police vehicles and investigators because there was a fatality.

Now, here is some speculation. Given the time of 4:30AM it was dark. Given the locations of the vehicle, the body, the backpack and shoe I suspect that the cyclist was in the crosswalk at the time of the crash.

Beyond, that I would get into serious guesswork. What was the speed of the vehicle? Did the cyclist have reflective clothing, headlight, headlamp, etc.

@emily you’re rude and obnoxious. Go back to undergrad because you’re acting like a child and obviously belong with the rest of the fools in their 20s.

Still no updates?? How long does it take to figure out who was involved and what happened???

Why is there no information released yet about who the victim here was?