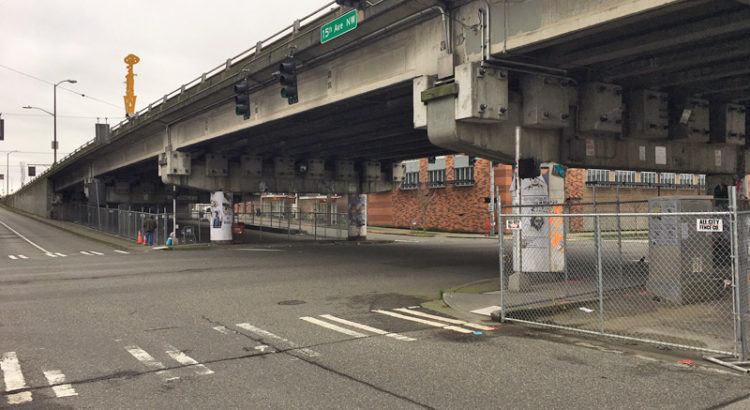 Both sides of Leary Way under the Ballard Bridge are now surrounded in chain link fence. In some places, it’s topped with barbed wire. Until the fence went up, the area had been a popular place for the homeless to camp.

The fence was installed to “maintain the structural integrity of the bridge and keep our communities and commuters safe,” SDOT said in a statement. “Wooden structures, open flames and propane tanks all pose a clear danger to public safety and has the potential to destroy this critical transportation corridor that 60,000 vehicles rely on each day.”

SDOT said there have been two fires under the bridge in recent years, in 2013 and 2016.

It’s not the first bridge area that SDOT has fenced off from the homeless. Last November a “no climb” fence was installed under the Spokane Street Viaduct after a fire in an RV camp.

SDOT also pointed to the devastating fire under an overpass in Atlanta last year. Police say a homeless man set a fire that ignited plastic conduit stacked nearby. The new Ballard fence has been a hot topic in the My Ballard Facebook Group, drawing both praise for SDOT and concern the fence doesn’t address the larger problem.

Speaking with the Seattle Times, Councilmember Mike O’Brien says the fence is just displacing the campers. “They’re probably three blocks from here, next to some business,” he said.

Yep, and burning the bridge down and closing it would cost millions. Small price to pay to keep people out who haven’t been house trained, especially after the previous fires they’ve started under there.

” “They’re probably three blocks from here, next to some business,” he said.”

The city offered them “wrap around services” as they do when ever they remove illegal camps. Housing, drug and alcohol treatment and mental health services. If they’re living 3 blocks away, they clearly refused help and want to live on the streets.

What then smart guy? Throw out some more bird seed and scratch your head when you have hundreds of pigeons dumping on your constituents homes and property?

myballard all over this story….the fencing has been up for a week.

the unfortunate thing is all the parking lost for hardworking folks trying to get to their job.

mike and his dopey grin does nothing for the normal, average, taxpaying citizens of his district. he’s a SJW clown and seems to have no problem with the continuing degradation of the city. his favorite sons and their trash, needles, thieves, violence and completely anti-social behavior are ruining the city.

next up? handle the mess at commons park and st lukes. maybe use fencing to keep the, uh, neighbors, at st lukes IN….

Mike O’Brien really has mattered the art of the sh*t-eating-grin.

Shame he also forces us to eat his “social justice” sh*t sandwich.

@ Guesty
Yeah the daily junkie circus on 22nd is a real joy, isn’t it? God forbid we have a safe park and library for young people instead of a rotating cast of sex offenders, dealers, addicts and thieves.

Gee I wonder if this hug-the-turds strategy ultimately helps developers by driving out the single family units?

what about the campers who have now moved under the bridge on 46th street? By Ballard Block- we cannot use sidewalk to walk from work to Trader Joe’s or LA Fitness due to them camping and leaving trash…

The city that never stops preaching about recycling had to spend $100k to fence a couple small lots?

They chose the most expensive fencing under the bridge by the water earlier.
Walking those stairs often I can see the whole area.
Nobody was camping there.
Solved a problem that didn’t exist, we got to pay for it.

They have to find excuses to use up the flood of cash coming to them to justify asking for more next time.

you mean all the “services” crammed down the neighborhoods throat several years ago? when there were hardly any tents in ballard? the same services that many predicted would lead to the current day craphole that area has turned into?

don’t worry, sharon lee of lihi sleeps well at night with her 6 digit salary and that smug grin of “aren’t i a good person?”

God is this city stupid

Good. Tired of being harassed by those fucks every time I walk past. I’ve been screamed at for no reason by the junkies under there. This is why we can’t have nice things. They get abused.

They should have fenced them *in* — but with actual walls as tall as they can reach. No windows. Then they can live there, warm, and out of sight. And the trash the toss all over the place can stay inside with them.

Instead, the just moved down a block and are camping on the sidewalk (as mentioned before).

Seattle decides to build fences to solve a problem.
Huh.
Where have I heard this kind of idea before?

How many months or is it now years that Council member O’Brien has had to understand that the drug using portion of the homeless population that occupies many of these spaces will not accept services and will take full advantage of any public space and destroy it. These guys are free-loaders, and some are criminals hiding from the law. Others just break the law daily to support their habit. Ask the Security staff at Fred Meyer. Time for this to stop, or find a Council person who will represent the tax paying and law abiding citizens of District 6 and Ballard, and the values we hold. The vast majority of these street campers around the Ballard Bridge and along Shilshole Avenue are hard core substance abusers. They are not somebody temporarily down on their luck. If O’Brien just says the will move to adjacent business areas, kick their sorry asses from there as well. Make it difficult to live here, arrest them and get them drug -free, or at least prevent them from stealing bicycles or breaking into cars and homes to support their drug habit.

Guest
Frances Farmer will Have Her Revenge On Ballard

Hey kids, this is what happens when you listen to too much grunge music.
You end up “under the bridge”.

there’s always going to be losers who live their lives chasing dope and stealing from anyone they can. its not all mike obriens fault.

I wonder how many car fires occurred under the bridges, and if >= 2 if they will ban cars

Frater, when did you stop beating your wife?

This is ridiculous when you consider that the big fire in Georgia was more a product of materials that were stored under the bridge than the homeless who inadvertently caused it.

For those complaining about loss of parking– how many vehicle spots did you realistically lose? 10? 20? Because it looks tiny.

If there is a fire, firefighters need to do their job rather than complain about having to address another ‘homeless’ situation (like they’re not human beings). SFD employees are paid more than enough for their skill-set and should be happy to help those in need if that was really they’re noble intention.

The bridge down the road (near LA fitness) with a few tents– I hear those whining how a wheel-chair couldn’t get by and even walking past would be difficult but I have never seen ANYONE walking in this area, let alone rolling by in a wheel-chair.

The fence is kind of dumb– they should probably integrate future art projects in the area to dress the place up a bit. I’m all for the cool light project going on at the Fremont Bridge

WALLS ARE RACIST! I mean.. umm… uhh… This is different… somehow….

Is anybody here shocked at:

–The simplistic view of a fence will solve the problem.
— The price of $100,000 for what amounts to ordinary chain link fencing.

If you contact a construction company the price to “rent” is considerably less …. Which might be a good idea since as we saw with bike racks which were installed and are now being removed.

I think we need to put a fence around the City Council, enclose them out of doors and not let them out until they have a practicable solution which solves the homeless crisis in this city.

Who would like to start a crowd funding project.

Damn, the anti-homeless whiners are out in force on this one. The City puts up a fence to protect critical infrastructure and they STILL find something to complain about. I have a feeling that most of the people commenting on this article could win the lottery and complain about the taxes.