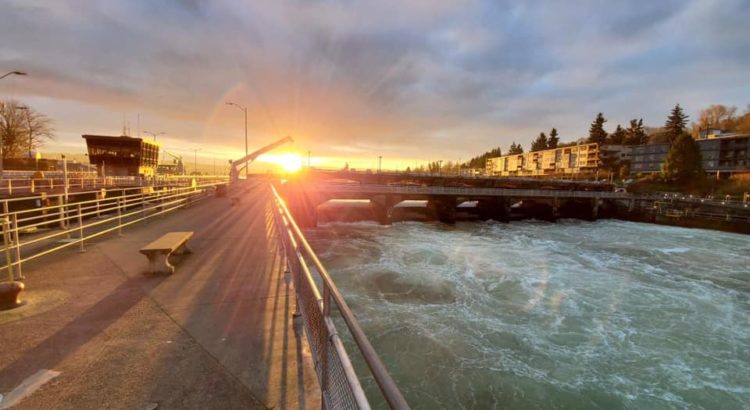 Over the past few days, the Ballard Locks dam had the highest water flow ever measured since recordings began in 1946.

The last time there was substantial flow was January 2009, but Dowell says this event appears larger than anything else in the database.

According to the Seattle Times, we “tied a rain record” in January. So just imagine this.

Weren’t the rain gardens supposed to change this?

LOL. Umm, no. Those were designed to make big city liberals feel better about themselves and that they are part of a grand solution. Much like that lapel pin they wear, informing the world they care MORE than you do about things. Much like the car they drive. All virtue signaling. Even riding that bike to work won’t stop the rains.

What you’ve just posted is one of the most insanely idiotic things I have ever read. At no point in your rambling, incoherent post were you even close to anything that could be considered a rational thought. Everyone in this comment section is now dumber for having read it. I award you no points, and may god have mercy on your soul.

Race and gender trolling. How original.

Did…did you just race/gender assume me?

Rich coming from a straight, while incel who tries but fails to be virtue signal troll.

Now now, no more bickering.
What was the purpose of the rain gardens, without personal insults?

Rain gardens are meant to provide source pollution treatment and stormwater detention to reduce impacts to Seattle’s combined storm-sewer system. If properly designed and constructed, they work well and have been proven to work.

The Locks are overflowing because of major rain events in the mountains and foothills, causing near record volumes of water in our region’s rivers. Rain gardens have nothing to do with river flooding.

But you already knew that, didn’t you?

Paintking has inhaled too many paint fumes. No wonder he is such a rambling babbler of hate. He’s a huffer!

No drought this year! Yay!