While it certainly hasn’t felt like spring very much so far, here’s one sign that nature’s eternal cycle is, well, cycling: 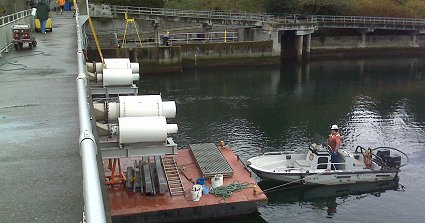 The smolt slides at the Locks are being made ready for the yearly exodus of young salmon migrating to Puget Sound. The slides give the salmon a safer route to salt water than the locks. According to the Washington Department of Fish and Wildlife, fish passing through the locks got their one-way ticket punched, so to speak, prompting the addition of the slides: “The fish were battered as they passed through barnacle-encrusted pipes at the bottom of the lock chambers at high speeds while the lock chambers were being filled. For young fish facing the stress of adjusting from freshwater to a saltwater environment, those injuries were fatal.”

All the slides should be operating by Friday.