Two My Ballard readers have emailed us about incident on 15th Ave. near 64th on Tuesday evening. “A man facing north towards Corry’s Fine Dry Cleaners fired 3 random shots while standing near the garages of Walt Auto Care,” writes Paul, who lives nearby. “One shot hit a white Subaru in the parking lot of Corry’s.” Julia confirms the story, saying that her friend was walking out of the Corry’s when the shots were fired. “Luckily the guy was a bad shot,” she writes. They say the man was arrested without incident. We’re making a few calls to gather more info, which we’ll post as soon as we get it. 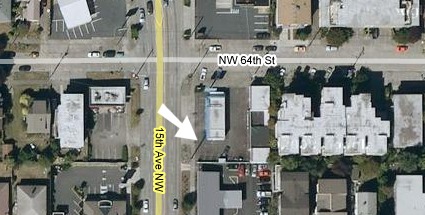 Update: Well, we’re able to confirm only the most basic details from the police report, which was released several days after the shooting. A 38-year-old man who lives in the area, described as needing “mental health care,” was arrested in the shooting. Just as our tipsters say, one of the bullets struck a parked car. As for any more details, a large portion of the police report is blacked out.