We’ve written before about how LA Fitness’ introduction to the neighborhood hasn’t been entirely popular, partly because it’s located right next to the symbol of Old Ballard, Edith Macefield’s old home. And now there’s this: 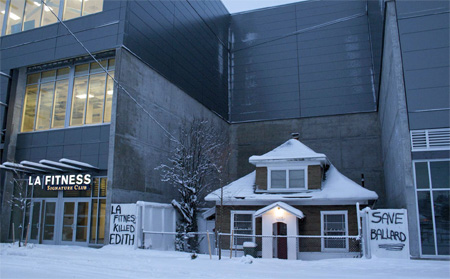 The messages spray-painted on the gates on either side of the house read, “LA Fitness killed Edith” and “Save Ballard.” We drove by tonight and they were painted over. “LiveSimply,” who happened upon the scene on Sunday and sent us the photo, also wrote her thoughts about the juxtaposition of LA and Old Ballard in the forum right here. Edith died of natural causes in June at the ripe old age of 86, and the fate of her home — which was built around by developers — is still unclear. LA Fitness is due to open in the next few weeks.