With all the teens out on Christmas break, there’s been a surge in graffiti around the Ballard area. But one tagging is particularly disturbing: 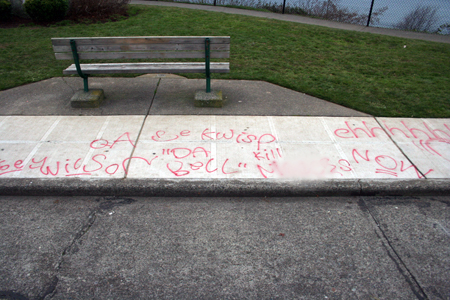 The graffiti on the sidewalk in front of Sunset Hill Park today says, in part, “All n****rs die now!” (We blurred out the N word.) “We recently relocated here from Chicago and were pretty taken aback by this,” writes My Ballard reader Jordan, who saw the graffiti today while visiting the park with his family. In a possibly related post, “mdan” wrote in the forum yesterday:

“Has anyone every noticed the hoodlums that hang out at Sunset Park at night?…. These kids tend to drive up and down 32nd late night and scream/beep horns that kind of thing.” 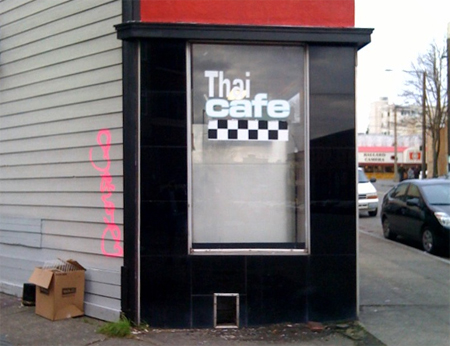 Separately, My Ballard reader John sent us this photo of fresh graffiti on the old Thai Cafe building (now Uma) along 20th Ave. We drove around the area and saw similar pink tags on Leary and Russell. 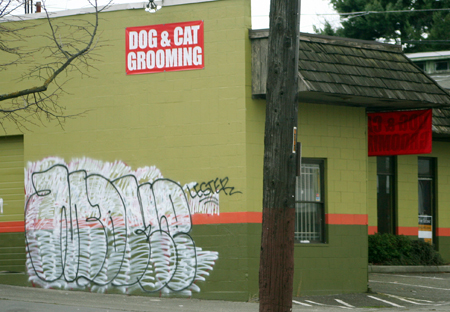 And we shot this photo of graffiti along 15th Ave. around 62nd. To report graffiti at a public place (or on private property that hasn’t been cleaned up for some time), you can call the city’s graffiti line at 684-7587 or submit an online complaint here. (Thanks Jordan and John for the tips.)

Adds Mickey in comments: “By the way, the Loyal Heights Community Center was also hit with graffiti over New Year’s. You wouldn’t believe the amount of area they covered. The bathrooms and the brick and conrete walls on either side of the bathrooms.”