Is it Ballard, Lower Phinney Ridge or Frelard? – My Ballard Skip to main content

It’s been a debate for decades: where do you draw the boundaries for Ballard? Is the area between 3rd and 8th Avenues, frequently referred to as Lower Phinney Ridge, really part of Ballard? How about closer to the water, where it’s sometimes called “Frelard?” The issue came up unexpectedly when the Ballard District Council considered updating its bylaws, which currently designates the area between 3rd and 8th Avenues from 72nd St. all the way to the Ship Canal as part of Ballard. But a new amendment proposed drawing the line at 8th Ave., instead. Here’s the area in question highlighted in blue: 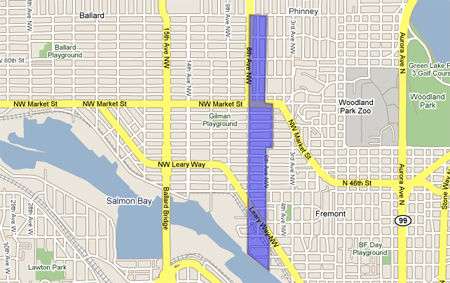 During the debate than ensued, the Ballard Historical Society was asked for guidance. “We’ve determined that it’s undetermined,” was the response. What about planning boundaries? They overlap and provide no clear guidance. “We can always go back to the original city of Ballard,” joked someone else. Finally, the council voted to update its bylaws but keep the old, wider definition of Ballard, at least for now. “Long live East Ballard!” exclaimed a member of the audience as others applauded after the vote.