We’ve all seen the occasional homeless person sleeping in the nooks and crannies of Bergen Place, but it doesn’t stop there, says Victoria Sangrey with Friends of Bergen Place. She told the Ballard District Council Wednesday night that in recent weeks they’ve been drinking beer and even selling drugs. “It’s a different issue being homeless and breaking the law in the park,” she said. Sangrey said the homeless are holding “parties” at Bergen Place as well as Marvin Gardens nearby (the small park with the Centennial Bell Tower), and she wanted to bring the issue to the attention of the neighborhood and the city. 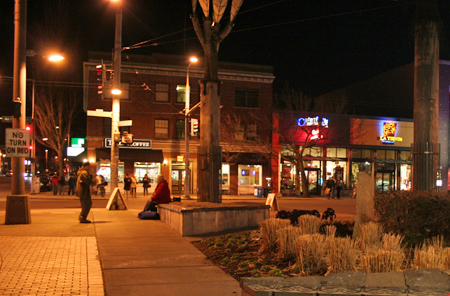 After the meeting, we went down to Bergen Place to snap some photos. Two panhandlers on the Market St. side were dancing to music and aggressively asking people for money, and another panhandler stood on the northwest corner of the street. This is not the behavior that Sangrey is referring to, but it helps illustrate that we’re seeing more homeless in the Seattle area — 15 percent more over last year, according to a a count in December.