Three and half years after offering $1 million for Edith Macefield’s home, the same developers offered owner Barry Martin $275,000 for the small house, Martin says. But he decided to take a $310,000 offer from Reach Returns, leaving the Ballard Blocks developers empty-handed once again. “The thing that struck me the most is he understood what Edith was doing,” Martin said of Reach Returns co-founder Greg Pinneo. “He gets it.” (See earlier story: Edith Macefield’s house sold, to be elevated.) 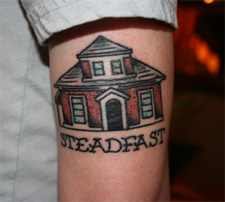 The deal came together when Martin discovered an old letter from Pinneo in an envelope Edith kept of real estate inquiries. “I went through them and called four or five of them,” Martin said, but Pinneo was the only interested buyer. With an offer from the Ballard Blocks developer on the table, and a new offer from Pinneo in hand, Martin said he remembered seeing a story about the Edith Macefield tattoos. “I’m thinking, what a bunch of whack jobs,” he said. But as he heard from the people who wore the tattoos, he said he realized the depth of affection the neighborhood has for Edith’s memory. “She wasn’t doing anything other than being deliberate about what she wanted, which was to be left alone, live and die, there in her house.” He then decided to sell to Pinneo.

“She made us all look right in the mirror and ask the hard questions,” Pinneo says. “I’ve never met her, but I feel connected to her because she lived her credo, lived her philosophy. I felt compelled to let this deep thinking live on.” As for Martin, he says he’s relieved it’s over. “She got into my head pretty good,” he said. “I feel good about it, and I think that she would, too.” He said he’s also looking forward to Reach Return’s bold plans for the property, although he wonders how it’s structurally going to come together. “I’m kind of excited,” he said. “Part of me thinks Edith would be thrilled about it.” As for the money, Martin says it’s going to a good cause: putting his two kids through college.