Edith Macefield’s house sold, to be elevated – My Ballard Skip to main content

Updated: The small house that Edith Macefield refused to sell for nearly $1 million has sold to a local company best known for its motivational seminars. The new owners, Reach Returns, say that they’ll keep the home, but elevate it off the ground in a surprising new development called “Credo Square.” 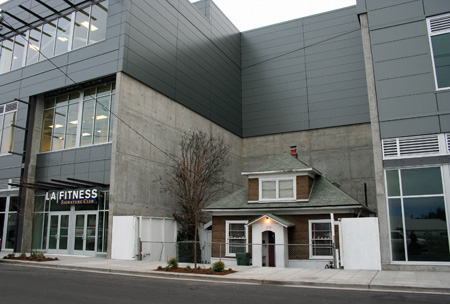 The plan is to preserve Edith’s home, “keeping the outdoor appearance identical,” and elevate it to the height of surrounding commercial buildings. Inside, the home will be remodeled and used as office space. Underneath, Reach Returns says it will create a two-level open space that will be open to the public during regular business hours. Credo Square will feature plants and flowing water, and it will be surrounded by tiles that can be purchased (for $250 on up) featuring your own name and “credo.” 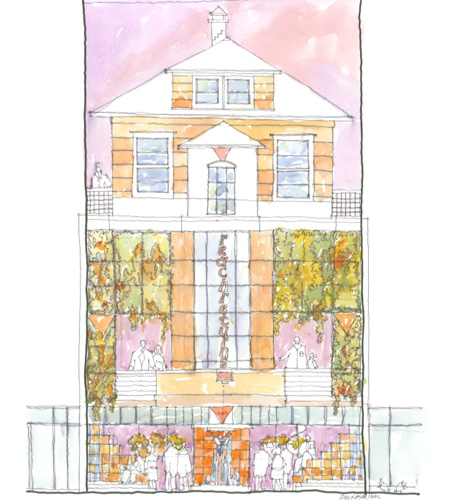 Here’s a sketch of the project. “The Edith Macefield story challenged many people to ask themselves the hard questions,” says Reach Returns co-founder Greg Pinneo. “The challenge she delivered so resembles the message of Reach Returns that we were compelled to find a way to keep the challenge alive. The home needs to be elevated literally and philosophically.”

Pinneo said he’ll move quickly now on securing the necessary permits, which will involve weighing the house to determine how much steel is required to hold it up. “We’re committed in whole heart to the project,” he says, adding that it’s not as complicated as it looks to build.

The Edith Macefield story has grabbed national headlines since the 86-year-old Ballard woman refused to sell, leaving construction crews to build a five-story development around her. Just in May, Disney used the home in a PR stunt to promote the new animated feature, “Up,” which closely mirrors Edith’s story. And for some Ballard residents, Edith has become an indelible part of our neighborhood’s history. “If someone could turn (her home) into something that brings folks together, that would be a great use of the place,” wrote one My Ballard reader several months ago. “I’d hate to see it just get torn down.”

See also: The inside story of the sale of Edith Macefield’s house

52 thoughts to “Edith Macefield’s house sold, to be elevated”