A man and a woman were riding their bicycles in Old Ballard after 7 p.m. yesterday when a driver opened a car door. Witnesses say the lead cyclist collided with the door, and he hit the ground hard. The woman was unable to stop in time, and she went over the top. 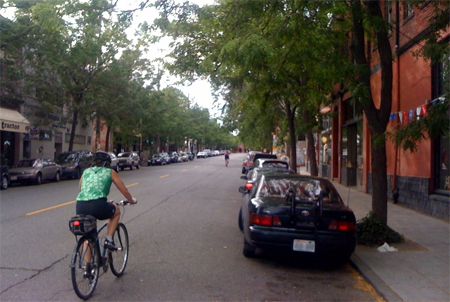 The accident happened here along Ballard Ave. near 20th Ave. “The man was curled in the fetal position in the middle of the road and was unable to move. The girl was sitting on the pavement next to him, nursing her elbow, and people started flocking over,” said Heather, who lives above the accident scene. “I brought down blankets for him, as he was obviously in shock and was not moving, and ice for her elbow. She seemed to only have minor injuries but his seemed to be internal and serious,” she said. “The paramedics came and put him on a stretcher. They were doing a lot of testing for back and neck injuries since he wasn’t moving and put him in a neck brace.” Due to health privacy laws, we’re unable to get an update on his condition. (Thank you Heather and Michael.)

Update: “Kris R.” left this comment: “I was the cyclist riding with my friend yesterday down Ballard Ave. Because I haven’t spoken to insurance nor consulted legal advice just yet, I would like to avoid giving specific details, but both Caitlin and I are feeling sore but otherwise out of the hospital and doing ok. Ironically, we were riding down Ballard Ave because it is safer than taking Shishole Ave NW. I would like to extend my deepest gratitude to the people that stopped and helped, in particular Heather – the blankets were wonderful and much appreciated – and if I remember her name correctly, ‘Judy’ or ‘Judith’ who stayed with me the entire time. The wonderful doctors and paramedics that took care of me really are angels in disguise. To help someone in their time of need is the grandest gesture of all, and I really do appreciate it.”

By the way, Kris R. sent a Tweet from the hospital: “Got doored in Ballard. In hospital. Chest hurts real bad.” We discovered it on our Ballard Wire page.

This is so so sad. :(
Yet another reason I don't think our streets are sufficiently safe for bicyclists when such freak accidents happen that are of no one's fault except that with the way our roads are, there just isn't enough room for cyclists and cars to exist safely :(
I hope both of the people will be ok.

Eeek… as much as I like to poke fun at bicyclists and the whole “missing link” thing, now is not the time.

I hope these two recover quickly!

Right, so you like to “poke fun” at bicyclists who want better trails, but then when the inevitable happens you offer completely disingenuous and false sympathy. Nice. You must be so proud of yourself.

Ballardmom, I'm curious why you say nobody is at fault in this accident? It seems to me that the person who opened the car door without looking first would be at fault, no? Maybe I'm missing something, but when cyclists get doored it's the door-opener's fault, IMO. Cyclists have a lot to watch out for, and I know they, and myself when I'm on my bike, try to watch out for doors, but ultimately the person opening the door should look before they open.

Bike coming up the road really close to cars and its the person opening the door thats responsible? A driver in a car could most likely see another car because its wide enough, but a bike?

Depends where you live. I hit a door when living in San Francisco and the owner of the car was deemed liable and had to pay full damages. On the other hand I've heard of cyclists being held responsible in similar situations.

As a Bicycle Ambassador with Cascade Bicycle Club I frequently talk to people regarding the door issue and surprisingly most people are unaware of the City of Seattle Regulations for opening vehicle doors into traffic.
“Bicycling and Driving with Bicycles, Section 11.58.050 OPENING AND CLOSING VEHICLE DOORS. No person shall enter, leave, or open the door of a motor vehicle on the side adjacent to moving traffic unless and until it is reasonably safe to do so, and can be done without interfering with the movement of other traffic, nor shall any person leave a door open on the side of a vehicle adjacent to moving traffic for a period of time longer than necessary to load or unload passengers.”

Therefore the person who opened the door into these bicycle riders is liable and will have to pay for the medical and damage and could possible get a ticket.

This is exactly what I fear happening to me every evening when I ride home from work. I hope he's not as seriously injured as it seemed.

Actually, under WA State law it is illegal to open a door “unless and until it is reasonably safe to do so, and can be done without interfering with the movement of other traffic.” So, in this case, the driver is at fault.

So, you want them to recover quickly so you can “poke fun” at them next week?

Tell us, bmvaughn, when exactly is “the time” to “poke fun” at bicyclists who want a safer trail? Why not when they're in a fetal position on the ground unable to move? It seems to me you would find that hilarious. The guy was unable to move!!! HA HA HA HA HA!!!

All the boys down at Ballard Oil are having a great big chuckle about that this morning!!

And the woman, she drove right into him!! Oh my god when I heard that I started lauughing so hard coffee came out of my nose. Those stupid elitist entitled bikers don't even know how to ride them bikes without crashing into each other! I'd like to see them do a real job, like sell sand or oil! You know, important stuff. LIKE SELLING SAND OR OIL. MISSION CRITICAL.

Just last after noon returning from a ride another hit the dirt crossing the railroad tracks on the missing link! A father attending his son on the side of the road. The Ballard Chamber is supporting a lawsuit to stop the trail??

The Ballard Chamber of Commerce joined the appeal and would rather SUE THE CITY rather than give bikers a safe trail.

Residents of Ballard should be DISGUSTED by the Chamber. DO NOT GO TO SEAFOOD FEST. CALL 206 784 9705 AND TELL THEM WHY YOU'RE NOT GOING.

THE BALLARD CHAMBER OF COMMERCE IS FORCING THE CITY TO SPEND YOUR TAX DOLLARS ON COURT BATTLES.

THE BALLARD CHAMBER OF COMMERCE IS SUING TO STOP THE TRAIL.

Well I'm certain no one intended to open the door in the biker's way – in this incident or most others. It really is difficult to see the bikes coming behind before opening the door – they're small, and they ride right next to the parked cars.

” when exactly is “the time” to “poke fun” at bicyclists who want a safer trail? “

Anytime! Thankfully we live in a free country and people wearing spandex to work deserve to be ribbed. Sorry if you're that uptight, but it might be the wedgy from those shorts.

FYI I, too, nearly got nailed on my bike by a car door this morning. Luckily, I have a sense of humor about these things and life in general.

These businesses all support the lawsuit AGAINST the bike trail.

For shame. How many of these businesses even understand what the Chamber is doing in their name?

CALL THEM. ASK THEM TO CALL THE CHAMBER.

Unless we start doing something, Ballard Oil and their cronies will be making sure these aren't the last two bikers laying on the ground bloody and unable to move.

The Ballard Chamber of Commerce should be ashamed. Let them know.

As a driver, you need to look in your mirror for a few seconds before opening the door, not just glance. Then, open your door just a couple of inches and *wait a few seconds* to give warning to any cyclist who might have been in a blind spot.

Everyone is quoting the RCW – we get it. Why do we so quickly jump to the defense of the cyclists in these situations? Of course it's tragic and dear God, I hope that these two recover but give me a break – sometimes when you're in a car you can't always see a cyclist. They're small, and not as wide as a car. Sometimes, even if you turn around in your seat, a part of your car might be blocking your view at just the right moment. Furthermore, who here hasn't been in a hurry at some point and pulled up and jumped out of your car?

Maybe the driver will be held at fault legally, but either way it's sad and both parties should have been more cautious.

I wish all of the people well, the bicyclists and the person who opened the door. It seems to me that both drivers and bicyclists have responsibilities and an accident is not intentional. With the increase in bikes, it means drivers much pay attention even more and that can be a challenge because it is difficult to predict the actions of other drivers and bicyclists. Our world already is too much of this group versus that group and it is important to see unfortunate events such as this from as many different perspectives as possible. We are all responsible for our fellow beings.

Let's all be fair here. I commute to school and work on a bike 3 out of 5 days a week, and I like to think it shoudl go both ways. YES, people should be checking before opening doors, BUT, as a rider, you need to be aware of your surroundings. Don't put yourself in that situation. When you are approaching parked cars, either shoot a quick glance to see where the occupants of the car are sitting, and if you are not sure what their intentions are, go wide. It makes me sick to my stomach to read about these things happening, and it always seems it's cyclists against car drivers. We ALL need to be aware of our surroundings. My thoughts and prayers go out to the two cyclists, as well as the person that opened the door…NOBODY wants to hurt someone like that.

Sigh……
Fine, boycott Seafood Fest. That is your right as a citizen. But I'm telling you it's not the Chamber who'll be crying over the thinner crowd.
I am all for the completion of the trail, btw. But I'll also be at Seafood fest both days.

Very well put, heartballard.
It was a terrible accident, and I wish the bicyclists a speedy recovery.

Thanks, I prefer the fest with fewer tantrum throwing toddlers.

Yeah, it's called a side-view mirror. Try it sometime.

Unfortunately, WA drivers are pretty clueless about the driving laws. A recent study put us near the top of the list of bad drivers; no surprise there.