Around 6 p.m. on Monday, Avram says he was hit by a 4-inch blow dart while crossing the Ballard Bridge. He sent us this email:

I was riding on the east side bike lane, heading north. I heard a little “pop” sound then felt a sting. My first reaction was that it was a rock that had been run over and shot out at me. It kept stinging so I reached down and felt the dart sticking out of me. I pulled it out and once I realized what it was, looked ahead at the cars to see if I could tell which car it was. Unfortunately, there were too many and by then they were well ahead of me. I stopped once I got to the end of the bridge to make sure I wasn’t bleeding, then rode home and called police.

Avram says he went to the ER and received a tetanus shot. He sent us this photo of the dart next to his remote control to provide some size perspective: 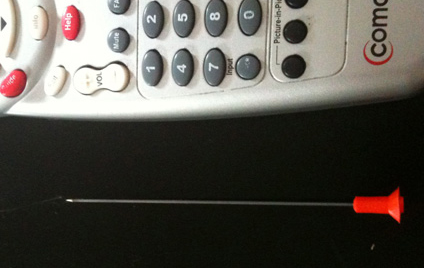 “I was also hit with a dart in Ballard,” says “Mksprout” in the forum, explaining that it happened while riding on 8th Ave. between 50th and 51st, also on Monday evening. “I have reported this to the police and encourage others to do the same,” Mksprout says.

Update: Police say “Mksprout,” a 39-year-old woman, said she was struck in the thigh by the dart. Investigators have no suspects in both cases, which occurred within 30 minutes of each other on Monday. By the way, since this story ran on MyBallard.com, all four TV stations and the Seattle Times has covered it.

109 thoughts to “Bicyclist hit by blow dart on Ballard Bridge”