Ten years after the city’s neighborhood plans were published, residents have been asked to help create a “status check” on how well the 20-year plans are progressing — and whether they need an update. Thursday evening a group of Ballard and Crown Hill residents gathered around a table at the Phinney Center to provide the city with feedback on the draft copy of the status report (.pdf). 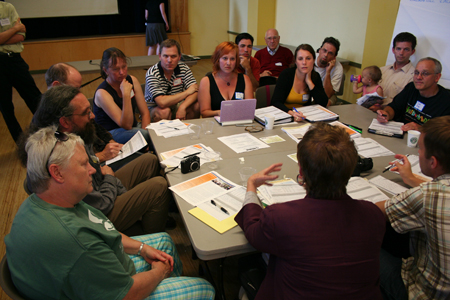 “(Ballard) is a totally different place than it was ten years ago,” said Craig Benjamin, explaining that he’s disappointed that the city’s draft status report fails to adequately explain the dramatic change in the neighborhood. “When the basis of a plan changes so dramatically, you need to reevaluate where you’re going,” added Peter Locke. Others agreed that the neighborhood’s transformation from a “sleepy fishing village” to a high-density community has introduced new priorities around affordable housing (“Ballard just isn’t affordable”), transportation (“Metro buses are packed”), safety and other city services. Another added that “Crown Hill is the red-headed stepchild” when compared to Ballard’s neighborhood improvements. Representatives from the Seattle Planning Commission and the Neighborhood Planning Advisory Committee took notes as neighbors provided their feedback. 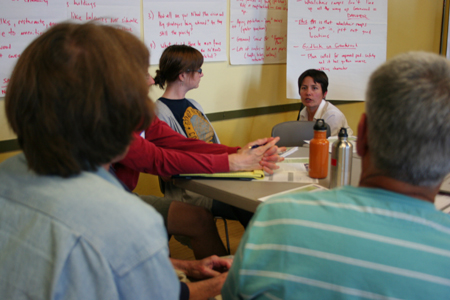 The report reviewed the plan’s original strategies: 1) create a Ballard municipal center with a park, library and service center 2) extend the Burke-Gilman trail through Ballard 3) acquire Crown Hill school and develop the facility into a community sports field complex and 4) establish a location for a commuter rail station. As the report explained, the first is complete and the next two are underway, but a light rail station is currently not planned for the neighborhood. Several residents suggested that the city make the neighborhood plans more flexible to adapt to new challenges and opportunities.

If you were unable to attend the meeting, you can fill out an online survey with your thoughts about the neighborhood and the status report. In October, the city will hold public meetings to review the updated status reports, and then they’ll be presented to the mayor and the city council to consider.

Here is synopsis:
-Too Fast, the 20 year plan I voted for is moving too fast!
-Not in my backyard, but infill is good!
-It's too expensive, but my house has lost so much value!
-Transportation is bad, but we don't want to pay better transportation, when can we vote it down?

That's about right. Americans are notorious for the blinders they choose to wear.

Great coverage! Thanks for attending all these meetings. I really appreciate it.

And I know that I'm not excused from attending in person just because MyBallard will report on them. ;-)

Bus improvements would be nice, but not in the forecast. I'm assuming any light rail we get will be Southbound to Queen Anne and the like. Places we can already get to by bus. Ah, well.
I'll stop griping now and echo Silver. Thanks for covering this for my lazy arse, Geeky Swedes!

I just don't get why light rail is so difficult in this town. In the time Seattle has wasted on repeatedly voting/debating the issue Phoenix actually went out a built a system and is going to expand it by another 20 miles within the decade. Kind of embarrassing that ultra conservative/Republican Phoenix was able to develop a light rail system faster than supposedly “green” and “progressive” Seattle!

Also amazes that Seattle can do such a great job with their parks and libraries but such a dismal job with mass transit and traffic improvements. Very weird.

Problem is there are people who will happily ride a subway or light rail system but would never set foot on a bus. I personally don't get that but I've certainly seen it in action in SF, Boston and NYC. For transit to truly work it needs to on a dedicated right of way so it doesn't get stuck in traffic the way buses do.

I completely agree with you but, to be fair, SF has the absolute worst bus system I've ever seen in the first world.

I live in Crown Hill and just want the city to build the dam* park! We've waited too long. Now the fire station is there. What will it be next? Tent city?

I agree Seaspider. I loved BART when I was in Oakland. It was great. And the buses there were a little on the stinky side (and always packed).
In Seattle I would take either if it went where I needed to be going (i.e. North).

i just tried to take the survey, but ballard isn't on it.

Yes and no on SF Muni. Compared to Seattle SF buses are much, MUCH more crowded (anyone who whines about a bus in this town being crowded hasn't a clue!), dirtier, less comfortable and you also have far more deranged/smelly types riding the Muni. However, I can tolerate much of that because the buses in SF run much more frequently and go everywhere. It's a joke that at the peak of rush hour buses in this town only run every 15-20 minutes (if that!) Also the buses in this town are really only good for getting to downtown. Going anywhere else simply takes forever when you factor in the 20-30 minute wait times. Finally, figuring out how to get from point A to point B on Seattle buses is impossible because the brilliant geniuses at Metro can't figure out how to draw a system map! Seriously, this is the only transit system I've encountered that doesn't place system maps in all of their bus shelters. SF Muni has far more lines than Seattle yet they're able to put up maps in their shelters. Ditto for Boston and NYC. I long ago lost track of how many times a bus was… Read more »

I really don't get the whole park thing. What's wrong with Soundview and Loyal Heights? Both are just a few blocks walk from most of Crown Hill, have great playgrounds and fields. Go a few blocks more and you have Carkeek, North Beach, Sandel, and Salmon Bay. I'm having a hard time thinking of any part of Crown Hill that is more than 5-10 blocks from a nice park. I have to give the city credit for doing a good job on their parks.

They have us as Crown Hill/Ballard. Red headed stepchild, indeed. ;-)

+1
When I moved here from Chicago, I was amazed at how second world the bus system is here. When I attempted to get a map online it actually (and still may) stated due to technology limitations they don't have a map available for download. I have a scanner, want me to do it?
I've learned to deal with it, but not the other Seattle bus “accoutrements”. First lose the free ride and replace it with a downtown free ride circle line which will swing by all the homeless hotspots from drug dealer dog park to Pioneer Square and all the tourist locales. Pre-pay ticket system for the rest of us with kiosks. Enforce ticketing on cars that block the box/intersection.

Yeah, I guess SF Muni has good and bad. When I lived there, I was amazed at how almost every single bus trip I ever considered was two buses. And the two-bus trip is the kiss of death, just like here. But the maps (and digital updates, for the last few years) at most bus stops are very nice.

My wife commuted by bus in SF for three years and has nothing but contempt for that system.

It's Crownhill/Ballard. Just scroll a little further down.

Seattle doesn't even make the minor leagues when it comes to vocal minorities! Study San Francisco politics for any amount of time if you want to see vocal minorities ***really*** muck things up. This is one area where I'm happy to see Seattle lagging behind.

A couple of Ballard businesses can really muck things up. Its happening now. They are true “vocal Minorities”.

Trains tend to run every 5 – 10 minutes, don't get stuck in traffic, don't stop as often, and all the stations tend to be well lit and covered. At every job I've had in this city, I've been able to ride my bike to work, shower and dress faster than I could get there by bus.

It's not that I “never set foot on a bus”, but I'm definitely not a fan. As for Boston and NYC their trains rock. Ditto for every European city I've visited. (I haven't spent much time in the bay area)

What you say is true. But some of us don't have the option to bike. I have to 'set foot' on a bus. I'm not alone in buses being my only option, and it does take too long and the routes are ineffective. If and when the mayor's toy train extends Northward I'll be happy to ride it. Right now I'm taking two buses (or one bus and a long walk) to get to 85th and Greenwood. A ten minute drive. It's nuts.

I would trade the new park for sidewalks any day! What modern city doesnt have sidewalks!?

“I just don't get why light rail is so difficult in this town. In the time Seattle has wasted on repeatedly voting/debating the issue Phoenix actually went out a built a system and is going to expand it by another 20 miles within the decade. Kind of embarrassing that ultra conservative/Republican Phoenix was able to develop a light rail system faster than supposedly “green” and “progressive” Seattle!”

You already figured it out – It's because Seattle really isn't progressive. Or rather the civic mentality is progressive, but the results aren't. This area has always had absolutely zero vision or identity for itself and what it could be other than “San Francisco Jr.”

Mass transportation is only one of the areas where this mindset shows.

Having lived in Chicago and Denver, I saw firsthand what a region that's really committed to providing effective, efficient mass transit for its citizens can do.

In Seattle it's just lip service to the electorate and then providing the absolute cheapest, crappiest solution possible at ridiculous expense to the taxpayer. For some reason the process itself is the result.