Whale spotted near the Locks? – My Ballard Skip to main content

My Ballard reader Dan said he spotted what appears to be a small gray whale just west of the Ballard Locks around noon on Wednesday, and he sent us this photo. He said it was there for about 20 minutes and then disappeared. 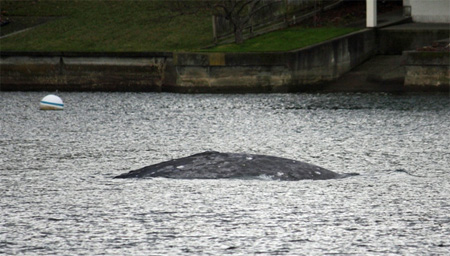 We called the Army Corps at the Locks as well as Shilshole Marina, but both said they hadn’t seen or heard about a whale in the area. It’s not out of the realm of possibility: a gray whale was seen near the Locks several years ago.

I don't think it will fit in the fish ladder.

It looks like a mound of concrete or sand. But how cool! I feel like going down there and seeing if it's still hanging around.

Maybe it's the Lock Ness Moster?

I'll bet this is legit. I was at Ray's having lunch around noon and a guy said “Hey, I think I just saw a whale” (and he pointed right by the #6 red nun buoy) . I looked for a while but didn't see anything so concluded maybe he saw a Dall's porpoise or something that he mistook for a whale. I didn't imagine a gray whale would get in to the shallows there, but the tide was reasonably high.

Thinking about it, if it was a pod of Dall's, chanced are I would have seen them again after a bit (it was pretty calm), where the whale could have gotten much farther away on a dive. So I'd give this one a “Confirmed”.

I saw about 4-5 gray whales on Tuesday around 3pm in the middle of the sound downtown. They must be in the area.

Only on Thanksgiving do we get a turkey of a picture like this! This looks like a mound of something? The thought of whales in Puget Sound though. Just imagine that. It's not like we live in Kansas or Utah. Thank God.

The most amazing part is for a whale to make it through the channel from Shilshole Bay without being struck by a boat or a ship. It isn't really wide and too shallow for a whale on either side. Running the gauntlet there. Thank goodness they don't eat salmon. How do you catch and relocate a whale?!

There were at least 2 whales, possibly more, off of Golden Gardens about 4:20 on Wednesday.

I'll have to be careful if I go sailing tomorrow.

It makes you truly marvel about what an amazing area we live in. It also makes you think twice about what you put in your yard when you realized that all the run off from Ballard ends up directly in the sound. No storm water treatment for our area… the water goes straight down the street, into the sewer and into Puget Sounds.

It's wonderful that the whales coming over to Shileshole. If you come down to Shileshole on the super low tides and talk to the ecologist they will tell you how well Shileshole has been recovering over the last 20 year.

I spotted a similar whale very grey marbled effect definitely not an orca in Eagle Harbor on thursday the 17th of december. I spotted the whale in the early afternoon and there was one other person on a boat that also saw the whale. It was deep in the harbor well beyond the ferry terminal, Off the Pub Dock.