Monday night is the Early Design Review (EDR) meeting for the Compass Center building for 1753 NW 56th St. According to the meeting notice, “The proposal is for a seven story, 57,000 sq. ft. building containing 80 low income housing units, offices and meeting spaces (Compass Center). Parking for 14 vehicles will be within the structure.” 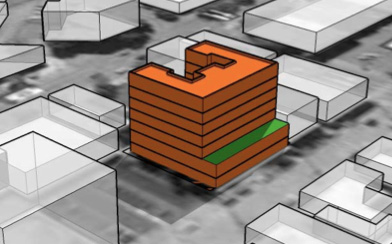 The EDR is the first opportunity for designers to offer their ideas for the site and vicinity to the Design Review Board. The photo above is one rendering from tonight’s presentation (.pdf) that Weinstein A|U will give to the board. The Board will offer their opinions and there will be opportunity for public comment. The meeting starts at 6:30 p.m. at the Ballard High School library.

This is the same lot where this eyesore was torn down last year. Compass Center hopes to break ground on this new project later this year.