Redhook Brewery, who now has a large brewhouse over in Woodinville, comes from humble beginnings right here in Ballard. 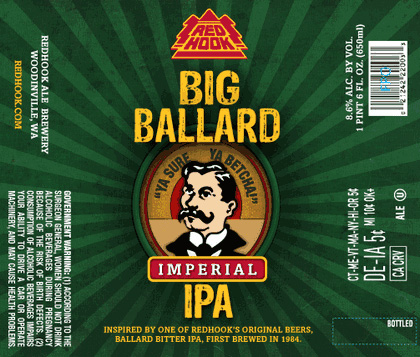 The popular microbrew giant got their start in an transmission shop back in 1981 and to honor their Ballard past, Redhook will release the Big Ballard Imperial IPA next month. “Ya Sure Ya Betcha!” the label reads. The new beer is inspired by one of their originals, the Ballard Bitter IPA which was first brewed in 1984.

According to the Washington Beer Blog, The official Big Ballard Imperial IPA release party is scheduled for Wednesday, April 14th at the Elephant and Castle in downtown Seattle. Once released, the beer will be available on tap and in 22 oz. bottles. (Thanks Timothy for the tip!)

Yay! Love the “Ya Sure Ya Betcha” on the label.

But I wish they'd named their Mud Slinger nut brown after us. That's such a good beer.

Still miss the Trollyman but it's nice that they remember us. :-)

8.6% IPA from Red Hook with our neighborhood on it?? I almost just fainted.

I was going to try this one a month ago, but decided driving was more important at the moment then spending another hour there. Very excited for this beer. During that tour I noticed that the old building was the old Maritime building. I thought that was really cool. I am a little too young to remember any of the redhooks outside where they are now

Are you sure? I don't think any brewery was ever in the old Maritime space before Maritime. If I recall, before Maritime it was a machine shop. Redhook's first brewery was on Leary where the Ravioli Station is now. They then moved to the tolley barn in Fremont before moving to Woodinville.

In return, Maritime Pacific should pay homage to Redhook's current location, and release a Bumblef**k Bitter.

There is a newspaper article with the owner that looks exactly like the old maritime building. I looked at it and my girlfriend did and we both could have sworn that it was Maritime Pacific that he was in front of so they might have taken it in front of another building or there is one that just looks like it if I am wrong.

I must be old. I thought they still made Ballard Bitter….don't pay attention cuz I don't drink beer anymore.

It's my understanding that the fist Redhook Brewery was in the Medin's Ravioli, then to teh buliding in Fremont on the canal, now Theo's chocolate. Any other oldies out there remember it like that? Am I daft?

At least, I am pretty sure that is what they renamed it.

I toured the original Redhook Brewery back in the late 80's. As I recall, it was just to the east of the building that contains the Ravioli Station now. I don't believe it occupied that space too. I could be wrong.

I don't remember it when it was where the ravioli place is but I sure remember the Fremont location. Yeah, it's where Theo is now. The Trollyman Pub was my fave brewpub. We used to sit on the cushy chairs and play scrabble.

If Maritime made an IPA that didn't taste like it was brewed with dishwater, I'd be a fan. I really, really want to like them because they're local. I even went down to Connor Byrne the other day and ordered one. Sadly, just as bad as I remembered it to be. Maritime's got nothin on Elysian.

Well, they've got Jolly. I happen to like most of Maritime's beers, but from as objective a standpoint as it's possible to have with something as subjective as beer taste, Jolly is something pretty darn unique and well-made.

I agree with you on that. I like Jolly. It's a tad sweet for me, but I like the punch that it packs. You'll feel that one in the morning if not careful!

Ballard Bitter was originally not an IPA – the IPA moniker was added later when IPAs became fashionable in the early nineties.
It was just a good, ordinary bitter.
oh, for the good old days when Redhook made real beer…

Why can't Red Hook show it off in Ballard? No place big enough? Boo to Elephant & Castle. The first keg should have been tapped in the Nordic Heritage Museum. Ya sure, ya betcha! Hey Olaf! Quit hoggin' the keg!

You may well be daft, Zipper, but I think you've got it right.

They say you can never come home again. After changing the original IPA name (RIP “Ballard Bitter”), can Redhook? Ya sure, ya betcha!

Zipper is right: Redhook Brewery was first in the Ravioli building, then moved to Fremont (now Theo's chocolate). I'm wondering if I still have my Ya Sure You Betcha sweatshirt?

you are correct. ravioli station then down to fremont before going to woodinville.

I and my talented staff of brewers are so excited to honor Redhooks heritage with the formulatiuon and release of Big Ballard Imp IPA. It's been a fun and creative project, and we're confident that the final formulation is fermenting as I write this blog. We hope to have some ready for a sneak peek at our brewers night, Apr 14th at the Elephant and Castle, which isn't the launch party, but will be a great event with many of the Redhook beers on tap. The time and location of the official laubch party will be announced in the near future.
HookbrewerKB