By next spring, the current play structure at Golden Gardens park will be torn down and replaced with more play equipment in a new location. 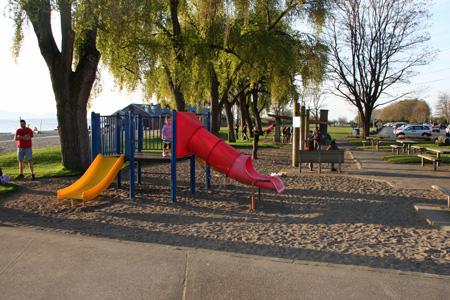 Seattle Parks and Recreation is working with Hough Beck and Baird landscape architects to design the new play area, with input from the community. According to Virginia Hassinger, the project manager with the Parks Department, there are no predetermined sites for the new equipment. “We will do a site analysis with the designer, parks staff and then discuss options with the public at this first public meeting,” Hassinger tells us. The play area is being relocated from the current high-traffic location and to allow more play equipment, the Parks Department website states. The new play equipment will also meet the standards and provisions of the Americans with Disabilities Act.

The first community meeting will be Wednesday, April 7, 2010 from 6:30 – 8 p.m. at the Golden Gardens Bathhouse, 8498 Seaview Pl NW. There will be a second design meeting later in April with a third meeting during the middle of June, Hassinger says.

The design work is scheduled to last through this year, with construction starting in January of 2011 and a completion of May 2011, Hassinger tells us. This project is funded through the 2008 Parks & Green Spaces Levy.