The house, dormitory, two sheds and garage that sit in the middle of the future 9th Ave NW Park will soon be removed. 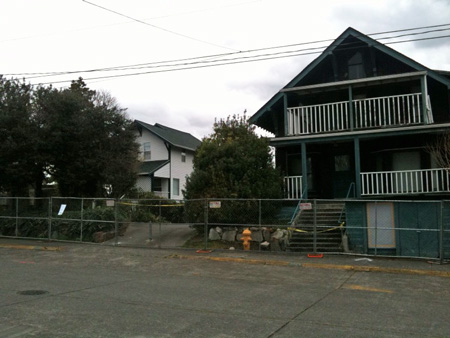 A fence has been put up around the houses at 7028 9th Avenue NW and the siding has been removed from the dormitory, which is the large southern structure. The Seattle Parks and Recreation Department is working with Eco Compliance, Long Painting, and the Seattle Conservation Corp. on this project. Signs on the fence explain that the Seattle Conservation Corp. plans to demolish the dormitory and the sheds sometime this week. We spoke with Kellee Jones, with the Parks Department who tells us they are still waiting on permits from the city to begin demolition.

What was the dormitory for?

The Church that used to own the property. It is where the men lived.

Such a shame with so many people losing their homes and living on the streets of Ballard that we have to destroy housing.

It was not a Seventh Day Adventist Church, but a sect named the Seventh Elect Church in Israel (and no, it wasn't related to the Love Israel family either).

I think the city knew they would never be able to turn that into homeless housing. That fight would have been epic.