The Scandinavian tastes of Ballard – My Ballard Skip to main content

In just a few weeks Ballard’s Scandinavian heritage will come out in full force for the annual Syttende Mai—or Norwegian Constitution Day—celebration. It’s hard to miss the annual parade that travels along 24th Avenue and then Market Street every 17th of May, but the celebration also includes other events throughout the day. In fact, it’s the largest Syttende Mai celebration outside of Norway, according to the parade committee, and one of the largest ethnic parades in the United States. A look at the 2009 Syttende Mai Parade

With its strong Scandinavian heritage, Ballard seems an appropriate location for the celebration. Over the next couple of weeks leading up to the festivities, My Ballard will be taking a look at the neighborhood’s Scandinavian heritage, starting today with food. Scandinavian cuisine lacks the gastronomical reputation of French, Italian, and the like (think about it, how many Norwegian, Swedish, Finish, Danish, or Icelandic restaurants do you know of?). But in Ballard it doesn’t take long to find its culinary treasures. 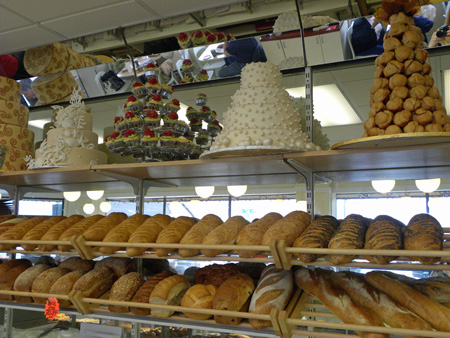 Seattle’s go-to spot for Scandinavian baked goods has long been Larsen’s Danish Bakery at the corner of 80th and 24th. A Ballard institution since 1974, one look at the lines around Christmas are enough to tell you that this place is the place to be if you’re looking for kringle—a pretzel-shaped pastry filled with almond paste and raisins—mazzarine tarts, a variety of breads including the cardamom-scented julekaka with candied fruit, and seemingly countless other types of Danishes, pastries, and cookies. Larsen’s also makes wedding cakes and kransekage, a typical celebration cake often seen at Scandinavian weddings. Its cookie-like rings, made from almond paste, are assembled to make a tower, which is then decorated with royal icing and flags from the country of the customer’s choice. 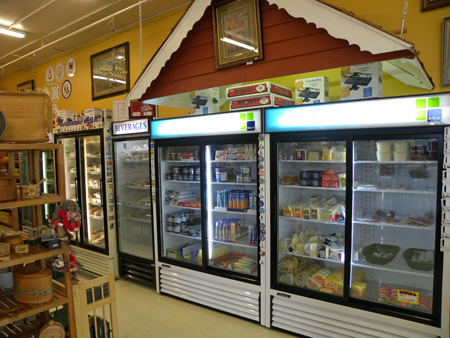 If you’re ambitious enough to try making your own kransekage, you’ll find the supplies—and much, much more—at Scandinavian Specialties at 6719 15th Ave NW. At the café you can get an open-faced sandwich topped with egg salad and smoked salmon, and then a pastry for dessert. Explore the shelves and fridge and freezers for lingonberry or cloudberry preserves, cheeses and meats, breads, and even lutefisk, if you’re so inclined. Don’t miss the books hidden in a little room behind the register; browsing through the cookbooks is a great way to get a taste of the often-under-recognized Scandinavian cuisine. The store also sells flags, Scandinavian sweaters, and a variety of gifts. 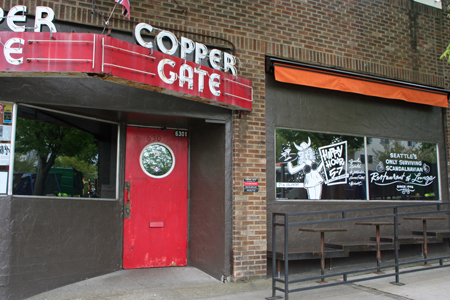 Finally, on the surface less traditional, the Copper Gate restaurant and lounge at 6301 24th Ave NW boasts a menu with such Scandinavian fare as gravlax, Swedish meatballs, fish cakes, and a selection of aquavit. Declaring itself as “Seattle’s only surviving Scandinavian restaurant and lounge,” the Copper Gate has been around since the 1940s, though new ownership in recent years has helped shed the old dive’s musty reputation.

Ages – eons! – ago, there was a Danish restaurant in Ballard – Vaersgo. I used to work there. Anyone remember eating there?

The aquavit at the Copper Gate is outstanding BTW.

Yes I remember Vaersgo, a very austere Danish restaurant. I enjoyed it in part due to my Danish heritage. Long before Vaersgo though was King Oscars on Aurora. In the 1950s and 60s this was the go to place for a true scandinavian smorgasbord. Alas there are not many scandahovians left.

I'll just eat some potatoes and a few pats of butter and call it done. Ya sure you betcha!!!

I go over to Norway a few times a year for work, but most of the traditional Scandinavian food scares me other then the bread and pastries. Luckily for me it seems many of the younger locals feel the same way and there is no shortage of “foreign ” and more palatable food available … I've even had good Mexican food over there.

I'm pretty sure the correct adjective is “Finnish”. Nice little survey article, though.

Born and raised in Ballard,100% Norwegian. Good to know that I can still get some of the foods I love.