Construction of the Roadside Raingardens project in Ballard is scheduled to begin in a few weeks. A total of 77 households will have gardens planted on the city-owned planting strip in front of their property, featuring a variety of plants and trees whose root structure is designed to hold stormwater long enough to absorb into the soil instead of pouring into combined sewer/stormwater pipes. 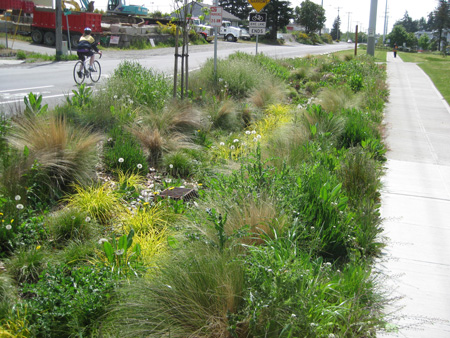 Seattle Public Utilities employees were on hand during the final community planning meeting on May 12 to address any last concerns from residents affected by the project.

“It’s a new approach to dealing with sewers,” said SPU project manager Karen York. She said the area has an average of 12 Combined Sewer Overflows per year, when the federal EPA requires an average of one. CSOs happen in older areas of Seattle where sewer and stormwater lines are combined, and during large storms they will sometimes overflow into Puget Sound to prevent sewer backups into people’s homes.

Construction for the project is expected to get underway in mid-June. The project was originally slated to begin closer to April, due to the rigid timelines required in order to use the federal stimulus money funding the project. However, York said they were able to push back the date so residents wouldn’t be stuck with bare dirt for any longer than necessary before the plants went in this autumn. Half of the approximately $1.5 million in federal money is a grant that doesn’t need to be repaid, while the other half is a low-interest loan to the city.

York said this later planting would allow the plants to grow better than the earlier proposed schedule. Paul Brothers, the contractors for the project, will be responsible for monthly maintenance of all the gardens for three years after installation, at which point they will be maintained by SPU crews or another contractor hired by SPU.

Shane DeWald, a Department of Transportation employee working with SPU, said they’re flexible on which plants are used, and have several combinations for residents to choose from for their own gardens, including Kelsey Dogwood, Barren Strawberry, Iris, and Swordfern. The deadline for plant selection is June 1, and any residents with a strong preference or allergy issues should contact York as soon as possible.

Residents had a variety of concerns throughout the planning process. Don Sutherland, a retired city engineer, said he was skeptical gardens would actually have a significant impact on the CSO problem. “It might do something, but it’s not going to do the trick,” he said. He also worried that the clay-like soil in his area might absorb water so slowly that it might back up into the street.

Claire Gibson, an SPU worker, said the planners have addressed whatever concerns they could. Areas with more clay-like soil will have a garden designed to accommodate that, she said. While the drains might back up during major storm events, as they sometimes do with the current system, Gibson said the gardens shouldn’t make that happen any more frequently.

When residents told SPU they worried that letting stormwater go into the groundwater might flood yards and basements, SPU commissioned a monitoring survey. Six wells were dug around the affected area and had their water levels checked monthly since mid-October. The goal was to understand how high the groundwater actually got during the winter, in order to plan for how much water would be added to that.

She said that all but two wells had no change in their water levels, and the wells that did change left plenty of space for the amount of water that would be retained, even at their peak.

Shari Cantwell, another SPU worker, said they also listened to neighborhood feedback by reducing the size of the bump-outs in the curbs on 29th Avenue Northwest. The bumps are necessary in order to make the gardens big enough to catch enough rainwater to make a difference in the CSO problem. The sizes of the bumps vary depending on the size of the street.

Neighbors have been concerned about the loss of parking as a result of those bumps throughout the project, and York said SPU conducted a study of cars parked in the affected areas in the evenings. She said she’s confident that there will still be enough room for everyone to park.

Not all community members have felt heard, though. Mark, a homeowner who asked his last name not be given, said he’s felt the message from SPU has been, “You’re the target, we’ve got the money, this is what we’re doing, end of story.” Others simply don’t want the look of their neighborhood to change, as one neighbor said: “We just like the way things are now.”

Liston-Riggs said she believes that when neighbors see the gardens, they’ll find they’re “an improvement, not an imposition.”

York introduced key project members sure to become familiar faces to the 77 households getting raingardens: Scott Paul and Bill Kitchens of Paul Brothers, as well as Roslyn Liston-Riggs, SPU’s on-site engineer who will inspect the contractor’s work daily.

In response to a question about garbage pickups during construction, Paul pledged that if any streets were so narrow that trucks couldn’t make it around construction, his company would bring cans to an accessible area to avoid service disruptions.

Liston-Riggs has worked on several similar projects and said she’s ready to help with any issues or questions residents have as construction progresses. She said she understands some residents’ concerns about changes to the sidewalk area; it’s been something people are “used to having permission to use and enjoy.” This is the first time the city has asserted its ownership, which has been met with resistance on other projects as well, Liston-Riggs said. 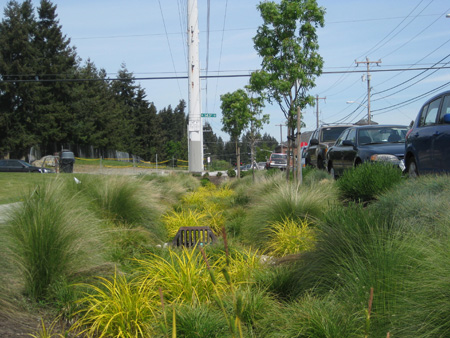 Another look at the raingarden along Linden Ave N in Seattle

Once the gardens were finished, she said, all their concerns “melted away.” Liston-Riggs said she encourages anybody who wants a better idea of how the gardens will actually look visit the site on Linden Avenue North between 132nd and 143rd streets, which is the most similar project done so far.

“It seems dramatic when it’s coming at you,” Gibson said, “but it seems to work out.”

Residents can find more detailed construction information and regular progress updates by visiting seattle.gov/util and searching for Ballard Roadside Raingardens. Karen York can be contacted at SPU_BRR@seattle.gov or at (206) 386-9161.

(Contributor Brionna Friedrich is a student in the University of Washington Department of Communication News Laboratory.)

But where will my Dog Poop?

Where will the bums poop?

Why would they do this project on high ground? It would seem to be more efficient if they did this where water would actually back up!
As for your stupid dog….Wok it!