It took just three months for Ballardite Adam Davis to change his lifestyle and daily routine to become the winner of the inaugural Ballard Fitness Fest.

“I’ve struggled with losing weight my entire life,” Davis says, “Mostly with keeping up the motivation and the drive to continue whatever exercise plan or diet I was doing at the time. The fitness fest just seemed doable. Even if I didn’t win, I would have proved something to myself.” 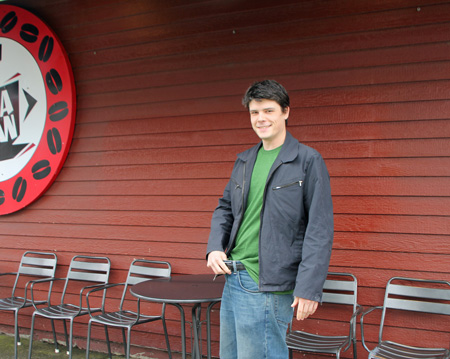 During the competition, Davis lost 18 pounds of weight and nearly 12 percent of his body fat for a total loss of 29.5 pounds of body fat. “I actually did much better than I thought I would, considering I ate eggs and bacon on a regular basis and didn’t give up my near-daily beer consumption,” Davis says.

Here’s how he did it:

I followed a pretty strict (except the beer, noted above) primal diet from Mark Sisson’s Primal Blueprint. I ate plenty of fruits and vegetables, while deriving most of my energy from fats and proteins. I cut out all pasta, bread, processed foods, etc. I did not feel deprived at all really, except for pizza, burgers, and macaroni and cheese. Other than that I felt very healthy, and not like I was “dieting.” As far as exercise goes, I went to the gym 2-3 days a week. Most of what I did was with natural resistance, doing pushups, pullups, chinups, etc. I didn’t get on a weight machine once the whole time. I didn’t do a single minute of running or stationary cycling.

As the winner of the Fitness Fest, Davis earned himself a $250 gift certificate to any shop in Ballard. He chose to spend the money at Kitchen N’ Things, on the corner of 24th and Market. “Considering most of my weight loss was due to changing my eating habits–mostly by cooking and eating at home, I think that giving myself more tools to continue making healthy meals would be an appropriate use of the prize,” he says.

EDGE Personal Training (Sponsor of MyBallard) sponsored the Fitness Fest for all residents of Ballard and intends to do another one next year. Davis has this advice for next year’s participants, “Don’t look at your diet or your workout as a chore but as a way to challenge yourself,” he says, “Find joy in the things that were hard last week but are easier now.”

would’ve been nice to see a ‘before’ picture when he was packing the extra pounds.

He gained muscle as well as burning fat.

And the muscles weigh more than the fat, so there’s a few more pounds that he actually lost in fat, but then the conversion to muscle gained him a few pounds. So he probably lost more than 20# of fat.

(especially going to the gym only 2-3 times per week–someone’s metabolism will catch up with him!)

What a great story! Congratulations Davis, keep up the new and improved lifestyle.

Young and male. The real news would have been someone in their 40s and/or female doing the same thing. Check back when you’re in your 50s and if you still have a chin, we’ll give you a prize.

So if he spent his $250 at Kitchen n things, did he buy half a pot? That place is EXPENSIVE.

I should have done this. I lost 23 pounds in about that time. Good ol marathon training.

I think it would be even better if he did it with out eating animals.

If God didn’t want us to eat animals, then why did he make them out of meat? eh? eh?

What’s with the negativity? Who cares what his age/sex is. He lost weight. He’s healthier. And so are, I’m sure, many others who participated in this fest.

If the doubters want to see how people over 40 lose weight on his programme they only need to go over to the Primal Blueprint website and visit the forum. Lots of people like me over 40 and losing weight easily without excessive gym workouts.

I am 44 and have lost 25 pounds during the past 10 weeks following the advice in the Primal Blueprint. As for exercise, I have been irregular at best. Not once in a gym, but some walking and body weight training. Now that I have lost weight my desire to do more has increased, and I look forward to much more activity. I am hoping to break the 180 mark in the next week.

Its a great way of life. I’ve done it and lost 20 lbs while adding more lean muscle mass. It isn’t really that hard and for those vegans out there you can never get the proper amount of protein from soy. This is a cleaner more natural way to eat and live. Cut out the fast food and start eating more greens wityh cleaner protein sources. Not onyl do you feel better and your body runs more efficiently but you also help local farmers by buying at the Farmer’s Market. We’re cheap as heck and we found its actually a cheaper lifestyle. I’m also not young like this chap. I just turned 55 so if a 55 yr old guy with a bad back (well that was before) can do this than why can’t everyone else?

Where’s my reward for not get fat in the first place? Wow, you’re fat and lost weight on a fad diet w/o much exercise. Sounds healthy…
BTW: It’s not your glands, it’s your mouth.

See, Fatties- reducing your portions and good ols excersize is all you need to loose weight. Quit your excuses of “It’s not my fault!” It’s my metabolism! It’s my genetics!”

I just checked out the ‘primal blueprint’ web page as others instructed and it looks like a total sham.

the claims they make are outrageous, and make it sound like even those with the weakest will power can achieve life long success as a slim guy with boundless energy.

I know they’re just trying to sell the product (information), but really?

I already eat pretty healthy, and I exercise a lot more than these people claim. I know proper food is important. But unless you eat total crap now, it’s not going to change your life.

Actually it works pretty well. Keep in mind that the success stories are from people who used to be trying to lose on diet soda and juice fasts. The exercise is really unnecessary, it’s 90% what you eat, so probably you overestimate the willpower it takes to lose weight. It might be a little exaggerated, but that doesn’t mean that it’s a scam.

I encourage everyone here to do their own research beyond the PB website; there is a lot of evidence to support the information on that so-called “sham” website. Read “Good Calories, Bad Calories” by award-winning science journalist Gary Taubes and you won’t think the same about conventional nutritional wisdom again.

A sham to sell their products? Hey smart guy, the website is free. You can buy Mark’s books if you want to but I didn’t. All the info is free at marksdailyapple.com. Perhaps you should spend some time on a website before generalizing.

As for the age thing, you cab do this at any age. Just because you feel your life sucks and you don’t have the will power to eat meat, veggies, fruit, nuts doesn’t mean this doesn’t work. Spend more time reading and researching and less time feeling sorry for yourself.

I don’t know why people assume that eating the way our ancestors did is a ‘sham’ instead of just plain logical. Yes, it takes a bit of will power as most people in this country have a habit of eating a lot of junk calories. You are cutting out processed sugars and starches that have tons of calories and very few nutrients. They are all empty calories. You replace them with foods that are much more healthful and that also taste good as well. When the body gets healthy food, hunger slowly abates naturally. The ‘sham’ is assuming sugary carbs with poor nutrition value are in any way healthy. However, carbs are tasty and addictive so it takes a bit of effort at first, but once you get in the right habits, it’s surprisingly easy as you no longer crave those empty calories.

I think most people would be able to make significant improvements in their body composition by just tossing out the obvious junk, such as sodas, juices, potato chips and the like. You don’t even have to stop eating fast food, just take it with water instead of soda.

Personally, I have also made significant improvements by following the free advice on the primal blueprint site; and I have to admit I did not fare nearly as well following nutrition advice from other sources (such as nutritiondata and caloriecount).