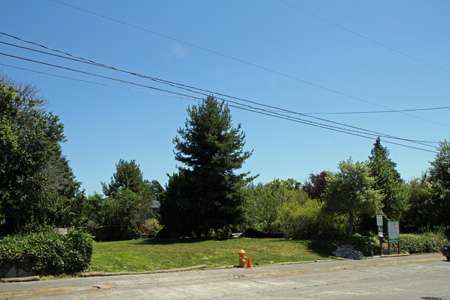 The park on 9th Ave NW between NW 70th and NW 73rd has a more unique name. Seattle Parks and Recreation Acting Superintendent Christopher Williams has named the park Kirke Park. “Kirke” means church in Norwegian. According to the Parks Department, this name pays tribute to both the Norwegian heritage of the neighborhood and the history of the site. This site was home to the Church of Seventh Elect in Spiritual Israel for nearly 100 years.

What about the separation of Kirke and State?!

We have a bike trail that goes through an industrial zone.

Instead of re-routing the trail through a safer area, this mayor has decided to shut down all the businesses along the waterfront.

Thank god they’ve finally named these parks, I can’t tell you how many sleepless nights that I’ve been tossing and turning just wondering when on God’s green earth someone would finally name them. Now that its done perhaps we can now turn the attention on more important things such as #1 on my list. Toilet paper should hang over not under the roll, Seattle Council and Mayor should pass a law and allow law enforcement officials to enforce the over not under law.

no phinney parks are great but these are pointless expendatures and will be used by few.

These look like excellent spots for animals to relieve themselves, for the homeless to setup a tent or two, or park the RV next to, or harbor the local raccoon population.

They are too small for anything else.

Green space. We should definitely complain. Perhaps they should have built condos there instead? Or maybe we should follow sweetrose’s line of thought and build them all in one neighborhood. Come on people, how bitter do you have to be to complain about parks in our neighborhood? And are you the same people who complain about the building of condos and townhouses? I’m also guessing that you haven’t been following the posts about these parks. The Crown Hill park looks pretty cool.

The park on 9th is actually pretty big and is already being used by kids and families. When it’s finished, whenever it may be, it should be quite nice. It is also, however, being used by families who don’t believe that dogs need to be on leashes which, as a neighbor to the park with a dog of our own, is pretty annoying and not exactly safe.