The expansion project planned for the Ballard Boys and Girls Club (1767 NW 64th St) is moving forward. The Department of Planning and Development approved the permit application for the project, which calls for a 5,400 square foot addition and parking for 18 vehicles. 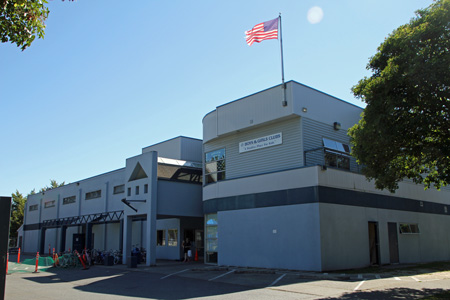 The entrance to the Ballard Boys & Girls Club on 64th St NW.

The remodel will double the club’s current size and will give each grade its own classroom, instead of the current split-classroom situation they have right now. The entrance to the club will also be moved from 64th St NW to 63rd St NW. 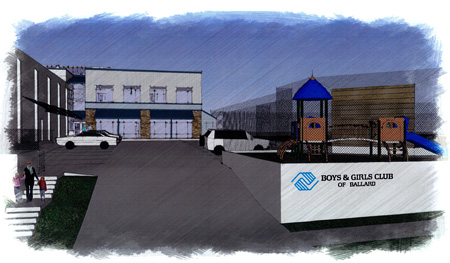 Artist’s rendering of the club as seen from NW 63rd St.

Fundraising efforts for the project are still underway. Mark Hendricks, the executive director of the club, says they are waiting on a possible $500,000 grant from the state and if that comes through they only need to raise $100,000 more. If the club doesn’t receive the grant, Hendricks is looking to raise another $600,000. The recent auction netted the club $56,000 which goes directly to the expansion. The entire project is expected to cost $2.1 million. 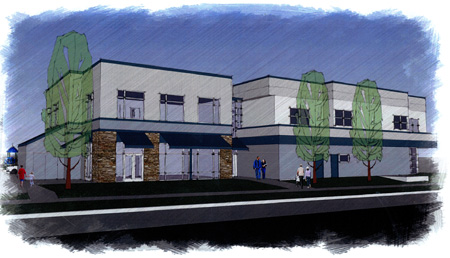 Artist’s rendering of the club as seen from NW 64th St.

Hendricks tells us that construction will begin later this summer. “We would hope to be mid-August that we have the contractor out here,” he says. If all goes according to plan, the project will be completed by next May.

The Boys & Girls Club refuses to build me a bike path exactly where I want it RIGHT NOW, and I will never, EVER support anything they do. I urge all My Ballard readers to join me in boycotting the Boys & Girls Club until they finally relent and support the missing link. Oh, yeah – and I demand a pony, too!

What kind of pony?

I hope they spend some money on hiring courteous drivers. Tuesday one of them was yakking on his cellphone, cut me off and almost caused a major accident. I beeped my horn and he gave me the finger. What an assclown, can I say that?

Yay! What great news! The Ballard Boys & Girls Club is a caring, positive place for kids, providing a great service to our neighborhood.

Great comment, baddabing! And what about the homeless? Are these kids homeless? We don’t need any more help to that demographic in Ballard! Can’t we send them packing to the Central District or somewhere where they’ll fit in?

Oh, in case anyone’s reading this out of context — these are sarcastic comments about the commenters on local blogs and news”papers” – I’m sure the Boys and Girls Club is truly an excellent organization.

Love that the club is there, but that building is ripe for a few Henry murals!