Your guide to SeafoodFest 2010 – My Ballard Skip to main content

The annual SeafoodFest is this weekend with 60,000 people expected to converge on downtown Ballard for salmon, arts & crafts and music. 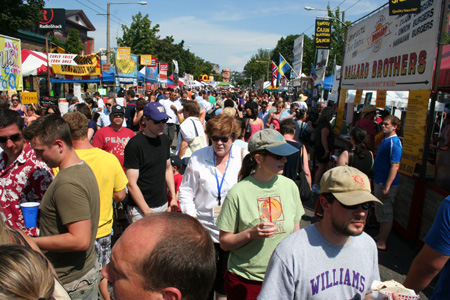 The crowd during the 2009 SeafoodFest.

This year, the Chamber of Commerce is making a few changes. “We’ve heard that the festival goers would like more places to sit and eat—so we listened,” the SeafoodFest website states. Instead of having a stage at Bergen Place Park, there will be tables with umbrellas and chairs for people to sit and enjoy their food.

A new KidsZone will be set up on 22nd Ave NW in front of the Ballard Library. The KidsZone will have a number of carnival-like games including a rock wall, a Velcro wall, spinner art, a troll toss, a clown striker, a ring toss and popcorn. Tickets will be $1, although some of the activities will require more than one ticket. The Center for Wooden Boats will also be on hand with a booth for kids to build their own wooden boat. This activity is free, although donations to the Center will be accepted. Philadelphia Church will still provide the free inflatables on Market Street. 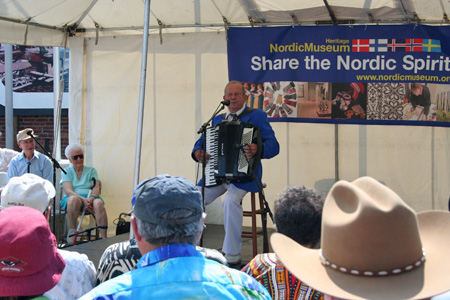 The Lutefisk Eating Contest always draws a crowd. This year it will be held at Bergen Place Park at 1:15 on Saturday afternoon. 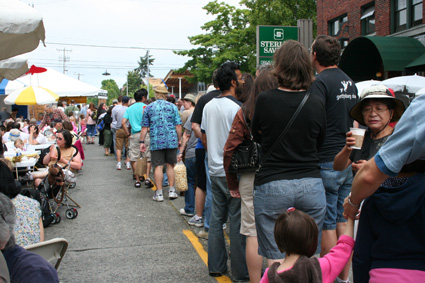 The line for salmon during the 2009 SeafoodFest.

You can’t have a SeafoodFest without the seafood. Trident Seafoods is once again donating 2,000 pounds of fresh salmon and Warren Aakervik, Doug Dixon and Cam Hardy will work the grill. For $9 you get alder-smoked salmon, cole slaw and garlic bread.

SeafoodFest runs from 11 a.m. to 9 p.m. on Saturday and 11 a.m. to 7 p.m. on Sunday. This is the largest fundraiser of the year for the Ballard Chamber of Commerce.

(Disclosure: My Ballard is a member of the Ballard Chamber of Commerce)

A fundraiser for the Ballard Chamber? All so they can pay for a lawyers and try and stop the missing link. Boycott this event, I will.

Sailor, you keep on posting on a site that is a member of the Ballard Chamber.. thanks for the business!! LOL!

I’ll be skipping this too. I just don’t think I can have a good time knowing that the hosts are suing the city to stop the completion of the trail.

The Ballard Chamber of Commerce, what a looser organization. They need a fundraiser to sue Seattle, costing us taxpayers to defend this BS.

SPG- Selectively Boycotting. LOL! You guys have no measuring stick do ya. Ballard Chamber again would like to thank you for supporting a fellow member of ours MyBallard

TimV also… selectively boycotting. Thanks for your support.

The estimate of people has been lowered to 59,992 to reflect the effect of the “Great BCC Boycott of 2010”

Great job by the Chamber in hosting this event, attracting new business to the area, and continuing to acknowledge and honor Ballard’s heritage.

A protest would be many times more effective than a boycott. Who will ever know if you don’t show up? But if you show up and wave a sign, people will see that something’s up.

I won’t be doing either, myself. I hate what the CC is doing, but I’d rather see them make money off this event and use some of it on terrible lawsuits than see them go broke and Ballard go with them.

If I were less lazy, I’d organize a protest /and/ buy some fish.

As a kid who grew up with Star Wars, I just love the theme this year – “May the Norse Be with You!”

MyBallard is NOT a member of the Ballard Chamber of Commerce.

Can I bring my dog?

Boycotting SeaFoodFest is an easy and obvious choice for many of us.

But boycott the sponsors as well. Tell these businesses to stop destroying our neighborhood at the behest of oil and gravel lobbyists.

Vote with your dollars. Send these companies a message. Support for the Chamber costs them support from neighborhood customers.

Everybody should be aware that the profits from this event are being used by the Chamber of Commerce on lawsuits to stop the bike trail in Ballard.

Do Not Spend Money At This Event.

“This is the largest fundraiser of the year for the Ballard Chamber of Commerce.”

Why not go and wait in line for salmon and then pepper Warren with questions about the appeal? It would be fun to hammer him with questions…he is a big player on this one.

Whaddya say? Anyone in?

If you say yes, I’ll leave my dog at home.

I’d love to see Cascade show up with some sort of attempt to shut it down. Not that I support the Ballard Chamber or Cascade, but think a Ragnarock end of days Lord of the Rings trilogy battle scene is just what Ballard needs this weekend. I’ll be Frodo, and hide under a bench when it gets too rough.

I went last year and didn’t even like it. As far as street fairs go, they are all pretty much the same, but this was the worst. Everything was too expensive, not a single good activity for kids. I guess that extra money goes to the lawyers?

I support the bike trail. I encourage everyone who supports the trail to join our little boycott! It won’t make much difference but you’ll save some money and feel good about supporting Ballard.

Okay, just clicked on the website and that poster is awesome. Will they be selling it? Pretty cool.

zipper, why even bother? His mind is made up. He does not give two sh*ts about Ballard, just his free parking and his profits. The rest of us are supposed to spend nine dollars on a small overcooked piece of salmon and shut the hell up while he and the lawyers laugh all the way to the bank. These people are suing to stop improvements to Ballard and peppering with questions is not going to change that it’ll just make him feel more important. He doesn’t even live in Ballard.

I’m with Gurple!
Protest over Boycott!

For crying out loud, not everything is about a single issue. Frankly, I think a lot of people have absolutely no idea what the Chamber does or is doing in the community and are choosing instead to focus on this single issue. That’s too bad.

And, given the tons of businesses that sponsor the event, have ads in their festival guide and the huge number of volunteers that show up each year to make this FREE community event happen, they must be doing something right.

I, for one, plan to enjoy SeafoodFest and expect a whole lot of others will, too. The weather is forecast to be great, so I’m going to grab a dog or two (or three), enjoy the sunshine, eat seafood (or my favorite, alligator on a stick), have an ice cold beer, listen to great free music, do a little shopping, see friends, etc. We always have a great time. See (the rest of) you there!

wow! look at all these boycott+1’s!
Now all you need is to convince the other 59,989 people not to go.
good luck with that, smartypants.

If this is a fundraiser, does this mean that they are a not-for-profit and publish a report to contributors type thing? Anyone know where they spend their money? Is it made public?

I would be interested in knowing how they spend the $$$