Is taking a photograph of a piece of artwork, which was funded by the public, infringing on the artist’s copyright of the piece? That’s what is up for debate, prompting an unusual fundraiser tonight at Sunset Tavern. 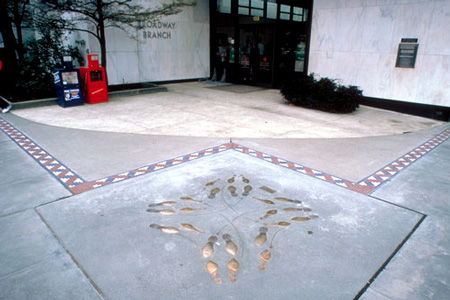 A decade ago, Mike Hipple took a photograph of a woman dancing along some “dance steps” that were embedded in the sidewalk along Capitol Hill. The photo was made available at a “stock photography agency,” presumably for sale. Hipple said he received a letter from the artist, Jack Mackie, who created the “Dance Steps on Broadway,” asking that the agency remove the photo. According to Hipple, the agency complied, but he said that wasn’t the last he heard from Mackie. Hipple writes on his blog:

Despite my agency’s removal, Mr. Mackie is now suing me for copyright infringement and claiming the full measure of statutory damages, possibly $60,000 or more. All for a photograph taken on a public sidewalk, showing a woman interacting with a piece of public art, paid for by public funds. And it only depicts a small portion of the artwork at that.

Mackie spoke with Seattlest earlier this year and says Hipple’s claims of fair use are wrong. This is not fair use, Mackie claims. “Yes, anyone can make a photograph of my work. What they can not do is use my work for their profit without any contact with me…. (Hipple) is playing pretty loose with the facts here and in many other claims.” Mackie says that he’s had to fight dozens of infringement cases, including one that went to the United States Supreme Court. “This is not an inadvertent snapshot of a shoe on a sidewalk. This is a staged photograph. It’s about three feet from the copyright notice,” Mackie says.

Meanwhile, Hipple is fundraising to pay for his legal fees. Tonight, the Sunset Tavern is hosting “The Mike Hipple Legal Defense Fund Benefit” at 8 p.m. More on the fundraiser on this Facebook page.

(Photo from the City of Seattle Office of Arts & Cultural Affairs.)

There are a lot of details that are left out here (that I’m sure were included in the legal case) that would determine whether or not Hipple was at fault for copyright infringement. Such as, was the work a “work for hire” and did the artist give the rights to the city upon its completion? Was Hipple seeking a profit from the photos he posted on the stock photography site? It’s really hard to say who’s at fault without more information…

I agree with Sarah – this is a complex case. Not sure why myballard is necessarily siding with Hipple.

Wow, what a mess. As an outsider sometimes it’s really hard to understand the desire to push an issue like this to such extent. “Ownership” is such a loaded concept.

caffy, i was just thinking the same thing. Why has myballard chosen to side with the photographer? how about a fundraiser to help the artist?

I’m really becoming irritated with this type of thing. If its on a public street I feel it’s fair game for being photographed and used. If an artist doesn’t want their work to be photographed, put it in a museum that doesn’t allow photography.

I don’t think that MyBallard is necessarily taking sides. Nothing in the article suggests that the Swedes have anything to do with the fundraiser. And no one is preventing Mackie from having one.

Most likely the Swedes were notified about the event by someone who is in support of Hipple – and thus the info provided was pro-Hipple. But the Swedes do provide some of Mackie’s p.o.v.

what about Mackie’s p.o.s., the art in question?

And the world has gone mad when it’s a crime to take a picture of someone on a public street.

So much stupid out there. Sigh.

I’m with the creator on this one. It’s not okay to profit from someone else’s copyrighted creative work.

If art is purchased or used by the public then it should come with a copyright disclaimer relinquishing all rights of ownership by the artist. Otherwise it should not be purchased or used period. Lest someone is sued for infringement by some greedy artist.

Sounds like a good way to game the system though. I might carve a couple interesting or controversial people sized statues, put them on my lawn and wait for people to stop on the sidewalk and photograph them so I can sue. hmmmmm.

a lot of you seem to be missing the point, that the case is about profiting off of the photo, not just taking it. Yes, you can take a photo of public art and not get sued. You can’t charge people to use that photo and not pay a royalty of some sort to the artist.

I recognize that I don’t understand the complexities of the rules, though…

I guess one question that’s important to this might be… If I go to a public festival or park with my child and someone is taking photographs, can I “copyright” on myself and my child, or can they do what they will with their photos? It’s always been my understanding that photos in public place are fair game. Is that true?

If you take a photo of someone’s artwork alone, I agree you should not profit from that.

But this photo was of a woman dancing on the artwork making it a completely different thing altogether.

I applaud the photographer for coming up with this brilliant concept. Kudos.

In that case, those are privacy issues you’re dealing with. ;)

Going back to sue after they stopped using the image sure seems like a bad PR move.

I wonder how this is different from everyone using the Space Needle image to sell product or even the Seattle skyline with the very recognizable Space Needle in silhouette.

That Mackie guy sounds like an unbelievable opportunist. No arts organization that patronizes his work will get a penny from me. No municipality that considers his commission will get-away quietly. I’m headed to Cap Hill for some beers and Block Party. I will think of you “Jack The Litigator Mackie”– when I go well out of my way to pee on your copyright.

This blog gets more pathetic every day.

And if we are discussing a civil action, shouldn’t these comments be closed, in accordance with the new Forum rules?

What we really need to do is to have a petition to pull all copyrighted works from public sidewalks.

I would be extremely surprised if the artist gave up copyright just because it was a public piece. Artists retain copyright when they sell work unless they specifically choose to sell the copyright, but that is rare. The “fair use” aspect is interesting, however. I agree with those who believe that the photo sounds like an entirely different piece, however. It will be interesting to see how it turns out.

The appropriate analogy to me is sampling music. That is, incorporating someone else’s music in your own music. When that happens, royalties are paid to the original artist.

HOWEVER, I am very, very uncomfortable with public art being copyrighted. It may be legal, but it needs to be defended to me better to get me on board. And I say that as someone who strongly supports compensating artists.

this post was so slanted it should be labeled as opinion or editorial. way to misrepresent and exclude both sides of the story!!!!

The issue is the reselling of the image of the original artwork. Public art should be photographed for your family vacation album but not for sale without the consent of the artworks copyright owner. Even IF the artist had relinquished copyright to the city (not likely or common), the photographer would have had to get legal permission from the city to use their copyrighted property in an image for sale. There are many complexities to copyright law that I only began to understand when I worked as an editor for a stock photography agency. We had to get art releases even on tattoo art that was featured in a stock photo. An artist retains their copyright unless it is explicitly given or sold to another party regardless who commissioned (paid for) the artwork.
While it does seem like a bad move for the artist to sue after the agency complied with his request, I am fully siding with the original artist on this.

I’d guess, we will be seeing more and more of these disputes headed to court. There’s lots of borrowing going on facilitated by the Internet. Just look at the Shepard Fairy case and the flap that created.

I side with the photographer on this one. There is often a distinction between what is legal and what is right. In this case, it may or may not have been legal, but given that it was public art, paid for with public dollars, I know what I beleive to be right.

This is a perfect opportunity to boycott the BCoC