A 21-year-old man who was arrested on July 14th in Seattle, accused of tagging buildings with the letters “ZEB” and charged with property destruction, has been arrested again — this time in Portland.

Samuel F. Lehtinen was booked into jail by the Multnomah County Sheriff’s Department on Wednesday for investigation of attempting to elude an officer, reckless driving and third-degree robbery, as well as other charges. Although Lehtinen was arrested in Seattle on the 14th, he made bail the next day. 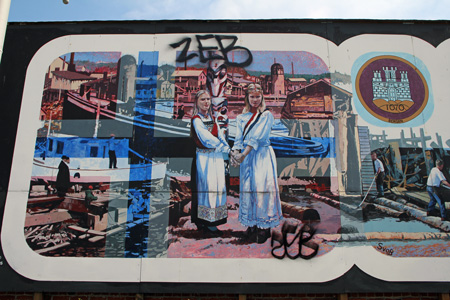 Taggers have sprayed “ZEB” throughout many Seattle neighborhoods, including last weekend in Ballard. More than a half-dozen tags were sprayed on buildings along Market Street including the Bergen Place mural. . “The ZEB tag has been pretty prolific in the downtown core,” Detective Mark Jamieson with the Seattle Police Department told us. “We don’t know the significance of it.” Because of the multiple styles of the tag, police believe that multiple people are responsible for the graffiti. (Thank you everyone for the tips!)