Updated: Six months ago, a Ballard resident videotaped a woman on camera taking a package from his front porch. Now he says it’s happened again. 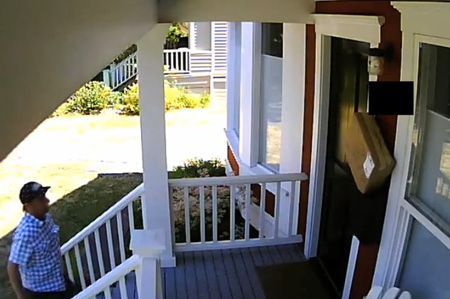 “Our USPS mail carrier delivered the package at 12:34 PM on 7/28, and the theft occurred at 1:36 PM. We’re not yet sure what the package contained as it was a gift,” the man writes, posting a link to the video in the forum. The homeowner filed a report with Seattle Police and has given them copies of the video.

He installed the motion-sensing camera last summer after he said he was burglarized earlier that year. (We obscured the man’s identity because he’s not been charged with any crime.)

This crap pisses me off. Can someone with more computer skill than I freeze the most visible image of his face and put in on flyers all over town?

Best solution? Fill a box with packing peanuts, buy three RAT traps (the really big ones that will break fingers), cock them, hide them in the peanuts and leave the box on your door step.

Seattle is a crime-ridden dump with a weak, foolish police force.

Shouldn’t the mail carriers (and UPS and FEDEX) be required to leave packages in places that are not immediately visible to everyone who walks or drives by a house?? I understand that some people will still try to steal mail and packages, but could we at least make it not quite as easy?

I know this dude could have been following a mail truck, but he also could have just been walking/driving by…. and that package was hanging out there like a flag.

What kind of a camera is that? It sure takes nice clear pictures. Banks and convenience stores could use them if they actually want to ID robbers better.

I use delivery remarks to place the package at the back of the carport, but it usually gets ignored. USPS is better than UPS in Seattle.

I agree with Maker! That said, this guy is a jerk and I have posted a link to the video on my Facebook page in the hopes that someone will recognize him. He’s so ‘nicely dressed’. The last perp was wearing all black and trying to be sneaky. This guy is bold!

Of course I am not defending him but didn’t this blog just remove, censor, and close forum threads about that woman who tried to adopt someones cat?

Such a double standard. It seems criminal accusations can be discussed after all, if the accused isn’t friendly with the GeekySwedes.

There is only side of the story being “reported” here. Maybe it was his package. Maybe this is some sort of smear.

So can we all just send in videos of people we don’t like, call them criminals, and get them posted here?

exactly Pho. This story is in clear violation of the forum rules. I’m reporting the ‘reporter’ to the moderator.

Instead of investing in a security camera, why doesn’t the homeowner go down to Builder’s Hardware and buy a locking mailbox for $120? Just a thought …

Right, because going to someone else’s door and removing a package from their address is sooo much like adopting a wandering animal. Why don’t you stroll down to Market St, withdraw all your cash and hand it out to panhandlers? It would make as much sense as your ridiculous bickering.

Double-standard or not, it is completely irresponsible of the GeekySwedes to post this video and shows an appalling ignorance or contempt for even the most fundamental standards of journalism.

This was not released by a police department. This is one neighbor making unfounded accusations against an unidentified man.

Shameful and embarrassing for the GeekySwedes.

I love how the Swedes conclude that the homeowner is a “victim.”

Might be time to give back that journalism award!

Are we allowed to discuss this alleged crime on the Forum?

Or are the rules for the home page story comments and Forum comments different?

I think I catch your drift, Debbie…

Pho – you should read WB’s comments about how she is going to put flyers out with the alleged thiefs face. what a joke.

WildernessBarbie of all people printing up flyers with this guy on it is priceless.

The GeekySwedes must be so proud given the way they sheltered her from criticism while posting this guy’s picture on the front page with no substantiation.

I’m confused by WildernessBarbie getting involved. There was a stolen, er, “missing” cat inside the package?

The real issue is how is the package hanging in mid air? Static electricity?

No, the guy who took the package was just trying to find the package’s owner. But if can’t find the owner he will keep the package. After all, he paid to pick it up!

Never underestimate the Seattle liberal’s ability to find negativity within any situation, latch on, and perpetuate the downward spiral. Seems to be the way they achieve inner satisfaction. Misery loves company.

I am more curious to identify the homeowner, not the guy!!

What do liberals have to do with WildernessBarbie allegedly stealing a cat?