The city of Seattle has nearly 360,000 square feet of rooftop gardens on 62 public and private buildings, according to a new report (.pdf) just released by the city. 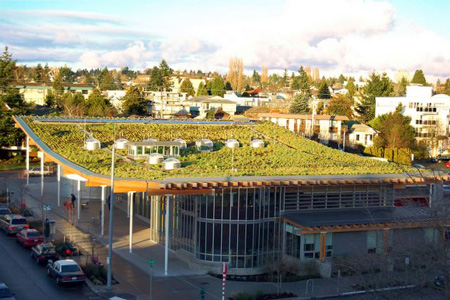 The rooftop of the Ballard Library. 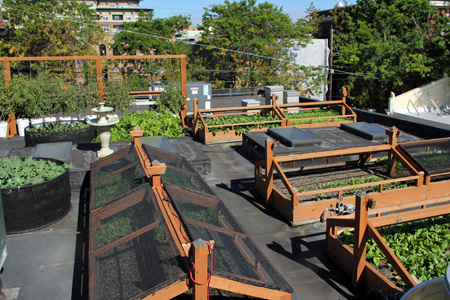 Bastille boasts planter boxes full of greens, herbs and tomatoes for the meals they serve. “It works for them as a business model,” Seattle City Councilman Mike O’Brien says, “You can’t get spinach salad much fresher than something that was picked moments ago on the roof of the building and transported by staircase down to your salad.” But enjoying a fresh salad isn’t necessarily the purpose of a green roof. It’s also environmentally friendly. “In the summer, they think about half the greens are produced on site in a space that was formerly just, essentially, soaking up heat from the sun,” Councilman O’Brien says, “Now it’s producing something productive and adding a myriad of benefits.” 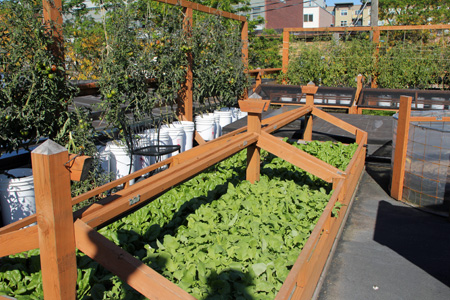 One of the benefits of the green rooftop is it is believed to slow stormwater runoff. The city is working on ways to reduce the amount of rain water that enters into the city’s pipes at the same time. “Green roofs, we think, can get us that two to four hour delay on the peak stormwater flow,” Joel Banslaben, a Senior Sustainable Strategy Specialist for Seattle Public Utilities says, “Which will allow the system to recover from that initial flush of the system and then slowly release it into once the treatment plants have the capacity to absorb some of that.” The city is currently testing this theory at five sites, including the Ballard Library. 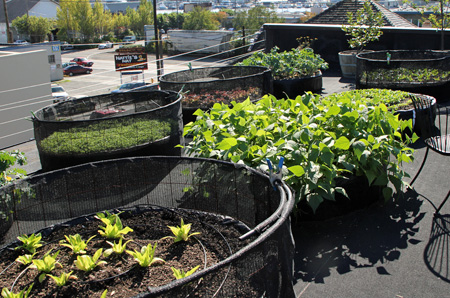 Earlier this year, Seattle Public Utilities rolled out the RainWise incentive program for parts of Ballard, in which the city will pay for rain gardens or cisterns on private property. If it makes financial sense for the city, RainWise may incorporate green roofs as early as next year. “Going into 2011 we’re looking at incorporating green roof incentives in that RainWise program,” Dave Laclergue with the Department of Planning and Development tells us.

Moving forward, Councilman O’Brien hopes that green roofs become the norm for new developments just as getting LEED certified has become. “I think we’re going to see in the future that green roofs are essentially the smart, best practices for the way to go.” In fact, half of new commercial developments in the city are designed with planted rooftops.

If you’re interested in seeing Seattle’s public green roofs, the city has put together a self-guided tour found here (.pdf)

well there’s certainly more than the 62 the city knows about.

there’s a house I walk by on 63rd that has one.

I think the article is a little misleading, yep. The 62 buildings that are mapped in the report are all public buildings. So I’m not sure why Bastille is mentioned above.

The list (1st link) most certainly includes all three cited examples. The report (2nd link) contains a pie-chart suggesting that about 40% of the 62 surveyed are on residential buildings, 20% are on commercial structures, and just under 20% are on public buildings.

Boardbrown – I’ve clarified the post. The 62 buildings mentioned in the first graph are public and private green roofs (the link takes you to a map of all 62). The self-guided tour is only the public green roofs.

Boardbrown – I’ve clarified the post. The 62 buildings mentioned in the first graph are public and private green roofs (the link takes you to a map of all 62). The self-guided tour is only the public green roofs.

what’s funny is one of the private residential roofs on that map in the Fremont area shows a planted roof over 20,000 sf! if this is correct, it doesn’t really sound very ‘green’

Are some of those planter boxes built with pressure treated lumber? Is that a good idea, when growing food?

I wanna find more info about this, anybody could?

Green roofing is hottest trend in roofing designs these days. Green roofs have many perks like the fact that they actually reduce pollution or that they increase the allure of a building. This is why people are rapidly opting for these roofs.

Junkie hepatitis feces makes the best fertilizer. Of course the now hazardous and famously crime addled Ballard Library has some trendy multi million dollar roof garden. Seattle is clowntown. Hey O’Brien, the rest of us proles have to shop at the grocery store where we’re hassled by felons nonstop at the entrances or watch the clerks get harassed and assaulted by surly hobos. Thanks. Maybe we could gill-net these losers, mulch them up with fish heads and grow a nice crop of overpriced kale.