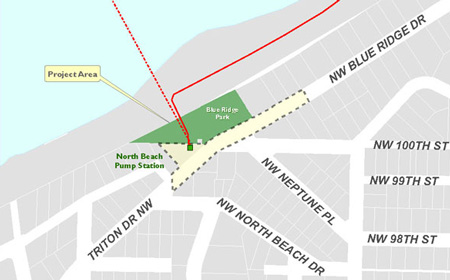 The county looked at three alternatives an agreed with the community on the best course of action. According to a release sent out by King County, “To control overflows of stormwater and wastewater that can occur during heavy rains, KingCounty’s Wastewater Treatment Division is proposing to build an underground storage pipeline in the public right-of-way beneath Triton Drive Northwest and Northwest Blue Ridge Drive.”

The pipeline would be 12 feet in diameter and 325 feet long. Approximately 230,000 gallons of stormwater and sewage could be held in the pipeline and later sent to West Point in Seattle after the storms subside.

There will be a public meeting on Tuesday, October 19th to answer questions about the recommended project. The meeting will be held at the Loyal Heights Community Center (2101 NW 77th St) from 6:30 to 8:30 p.m.