Changes are being considered for the Seattle Public Schools student assignment map and one option would have a big impact on Ballard.  When the new attendance boundaries were drawn up, Garfield High School’s enrollment soared.  Now, the school district is trying to relieve some of that overcrowding by tweaking the map. 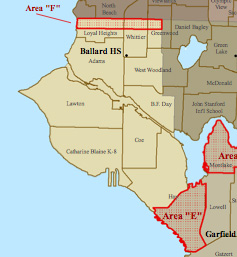 A Seattle Schools spokesperson tells us there are a lot of different options being considered and things are far from being finalized.

“We’re gathering feedback from our families on what they’re thinking and what they want to see,” said Teresa Wippel.

A public meeting on the proposed changes will be held Monday, November 22 at Ingraham High from 6:30 to 8 p.m.  The school board will approve the final changes in January. (Thank you Kara and Patty for the emails!)

Scenario F? Really, this again? There are quite a number of students (including mine), who live in Area F. These are students whose parents, more than likely, plan on sending their kids to Ballard HS. Once again, it’s a ridiculous proposition. Who thinks of these things, and most appropropriately, why? This is the sort of myoptic mentality that invites the continous criticism of the Board members and the schools chief. It would be pure folly to follow such a horrific path.

Given all the residential growth in the South Lake Union area I wonder if anyone is thinking about building new schools to service that area. Kind of doubt since that would require long term thinking which is something people in Seattle seem to have a real problem with (witness the monorail fiasco) and spending tax money (people here seem to think everything should be free).

I’m sure all the people in Area F are now screaming bloody murder. Of course I’m sure these same people were silent when it was the kids north of 85th getting reassigned! Not so fun when it happens to you, is it?

I could care less either way. Neither Ingraham nor BHS seem to be very good. I remember seeing an article on this site where BHS was awarded for getting the passing rate on the science portion of the WASL up to 53%. The WASL isn’t exactly a demanding test and 53% on any test would earn you a failing grade. I wouldn’t send my kid to either school.

When the new attendance boundaries were drawn up, Garfield High School’s enrollment soared.

Only because the people who made the decisions REFUSED TO LISTEN to all the folks who knew darned well this would happen. They’re trying to pit parents against one another as usual, get everyone all worked up, and then push through whatever their real agenda is (probably trying to split APP at the high school level, which they protested so much they would never do ever, oh no, the boundary would fix everything so that we wouldn’t have to). I am so sick of getting manipulated and jerked around.

For what it’s worth, I don’t think they’re actually going to move the Ballard boundary line (though they’ve certainly done things just as dumb in the past, so I’m not ruling it out). My sense is that it’s something thrown in to make everyone upset and pit different parent groups against each other.

Seems a little odd to move 90 student from Ballard to Ingraham to allow 52 students from downtown to come in. I suppose that’s because they expect more growth in the downtown core?

What we really need is charter schools. Then kids that live in Ballard can actually go to a school in Ballard. High schools in Queen Anne and Magnolia get sold off and Ballard residents are paying for it.

don’t worry! your LHES kid is so awesome he can take on any challenge ahead!

This city just cracks me up!!!! This isn’t rocket science. What kind of people can’t look at all the available data and projections to figure this out. Obviously it is above the intellectual abilities of those currently responsible. So get someone that can! This really isn’t that complicated. And leave it to seattle to add thousands of residential units to an area without attention to details..like…SCHOOLS!! Hysterical. But then again seattle reduces off street parking requirements for developers and builders (forcing cars onto already packed streets and to get residents to give up their cars!!!LOL), start then stop then start then stop the monorail, There is the whole viaduct saga. Certainly is entertaining. My friends that live in other large cities love my stories of Seattle operations. Fire the morons currently in charge of this boundary issue. They are either hopelessly under qualified or just pulling shenanigans for nefarious purposes. It is seattle so I have no idea which to bet on.. Maybe the new boundaries will bring more football prospects. Thanks for the chuckles seatle.

Thanks Josh, for bringing up the sales of school facilities when the population data CLEARLY shows that the temporary decline of students was ONLY going to be temporary. Seems everyone EXCEPT the school board new that student populations would be rising within 5-10 years. WTF? Who are these people? The urban density plans and the residential development plan for SLU and Belltown have been on the boards for 15 years. Everyone knew those areas would see massive residential increases. Along with the increase in numbers for the other neighborhoods. The ridiculous short sightedness possessed to close Queen anne facilities given ALL of the data was shocking. Yet this stuff is standard seattle operating procedure. Hysterical.

How would charter schools help? We still wouldn’t have any more BUILDINGS over near Queen Anne and Magnolia. If any Gates/Broad Foundation folks are listening (hah) and want to know what kind of problem Seattle has that COULD be solved by throwing money at it, here’s my idea: rebuild Queen Anne High. That one feat would do so much for Seattle schools. There would be big old ripple effects — good ones, for once. I hear there’s a depression and real estate prices are down, plus construction workers are hurting and would probably bid a little lower than they would ten years ago.

I know, I know — pipe dream, you couldn’t get the contiguous land over there — but still. (The district does actually own some land in Interbay, but I don’t know if it’s a workable building site.)

the idiots are at it again.

Doubtful on the contsruction costs. They would be expecting pre-crash wages. No way would they accept a cut, recession or not.

I’ll be fighting to keep Area F in Ballard, just like I fought to keep the people north of 85th in Ballard in the last go-round. It’s pitchforks and torches time!

Just sayin, there’s a gigantic parking lot over in Interbay with nothing but school buses on it. Not to mention the National Guard armory. Either of those spaces would fit a high school. No money to build it, though.

Same for me – I fought then and will continue to fight now. I live in Area F too. It ridiculous to put kids living as far south as Jefferson St in BHS and kids who live a few blocks away somewhere else. Soon the actual school will be located in another school’s district. Sheesh.

Why not send some of the southern Garfield kids to Rainier or are we not liberal enough for the s***-storm that would cause?

The next revision will put the northern boundary for BHS at 65th to accommodate all the students from else where.

One over-crowded school to another — how’s that going to help?

Well, the real problem is that Rainier Beach has about 450 kids in a building that can hold 1500 or so. The capacity problem is that very few people want to go to that school. There’s plenty of building space available, even if it’s not exactly where we might like it to be. That’s why a new high school is off the table.

The data and studies are already available from sources much more thorough, smarter and trustworthy than the school board folks. Do not let them spend money to do their own duplicate research. That system has shown it’s shortcomings so many times already. Learn from it.

The scholarship and placement exams for the Blanchet, Prep, Holy Names and O’Dea are in December . . .

And we want government running our health care? Really? Too bad there isn’t more competition driving things instead of beaurocracy. As in common sense. But todays kids are apparently tools. They’ll be 1/2 educated tools though!

is ballard hs over crowded right now? might there be room to absorb the 30 or 60 kids from south lake union without sending more neighbor kids to ingraham?