One of Ballard’s best known crusaders in the battle against breast cancer needs your help. Faye Cluckey, a cancer survivor we profiled earlier this year when she was chosen to be an honorary bat girl for the Seattle Mariners, is joining forces with her daughter and niece this weekend to raise money for the Susan G. Komen Foundation’s 2011 “3-Day for the Cure.” 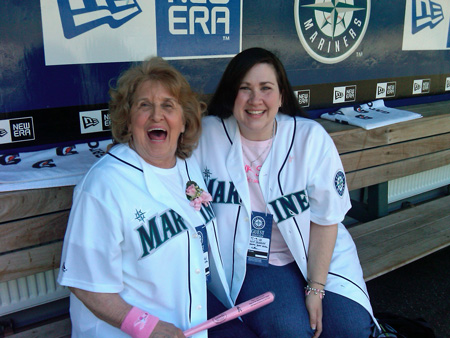 Faye Cluckey with her daughter Milly at the Mariners game in May.

They’re hosting a bake and craft sale today and Saturday (12/10 and 12/11) from 9 a.m. to 5 p.m. at the Ballard Baptist Church, 2004 NW 63rd Street.   Although the Seattle “Race for the Cure” event doesn’t roll around again until September of next year, Faye is passionate about the cause and hopes to raise as much money as possible.  In fact, her daughter Milly already has her online donation page set up.  They encourage everyone to drop by the church this weekend to help make a difference.