There’s another new addition to the cluster of businesses at the foot of Phinney Ridge on 65th St. — the Ridgeback Cafe. The family-friendly restaurant opened for business on Friday evening in the old Renick Printing space at 500 N.W. 65th St, next door to Slave to the Needle. 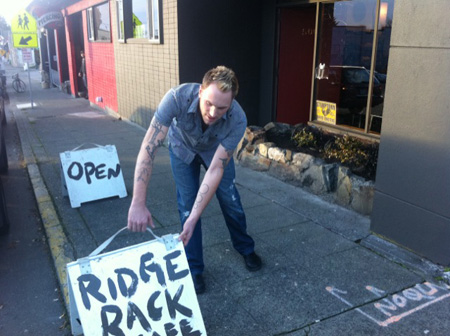 The Ridgeback is a neighborhood cafe featuring a full lineup of crepes, sandwiches, Belgium waffles and some tapas, as well. It serves beer, wine and espresso drinks. Owner Justin Taft says he created The Ridgeback in the same vein as his other restaurant, the well-regarded Hangar Cafe in Georgetown. 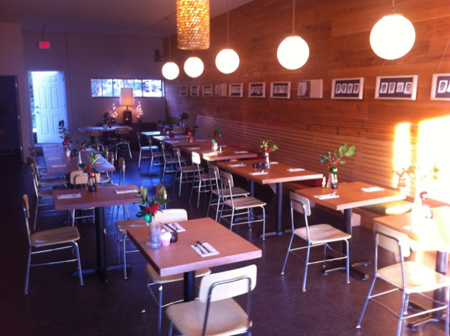 Taft said they received final permit approval for The Ridgeback from the City of Seattle at 2 p.m. Friday, and he opened the doors an hour later — months after they originally intended to open.

“It feels fantastic. It’s been such a journey, but it’s been a great experience,” a very satisfied and relieved-sounding Taft told PhinneyWood. “We’re so ultra prepared. We are so stoked.” Earlier this month, The Blue Glass restaurant opened a few doors down.

(Thanks to Dale at PhinneyWood for help on this story!)

So excited to give it a try, it is 1/2 block from my house and I have been patiently waiting for them to open. Wishing success to the Ridgeback Cafe!

Nice! Ballard needs more places like this, especially for lunch, and I’m looking forward to checking it out!

Yeah, great! Will definitely be checking this place out soon…

If he’s there every day, it’ll be well worth the trip. Yowza.

MGHart is correct. The term “Belgium Waffles” is a common mondegreen.

Yay! Finally a breakfast spot in my corner of the hood!

We walked there for breakfast this morning, and it was great! My daughter proclaimed her waffle “the best breakfast EVER!” then promptly fell asleep thanks to the sugar crash.

Awesome food after a little wait since the were slammed mid-morning today…I’ll be back for sure.
Recommendation to Justin the owner: Get HENRY to paint some kind of “RidgeBacked” animal on the front of the building. Would be good for visibility as its currently a bit non-descript in front

Awesome food after a little wait since the were slammed mid-morning today…I’ll be back for sure.
Recommendation to Justin the owner: Get HENRY to paint some kind of “RidgeBacked” animal on the front of the building. Would be good for visibility as its currently a bit non-descript in front

please….not another henry. celebrate diversity and get another muralist, anyone, just not henry.

I’d rather you just get a bunch of 8 year olds with a few buckets of paint and let them go to town.

Neat word! You learn something new every day, often from someone who’s conspicuously showing off his or her knowledge.

I mean no disrespect — I intend to drop “mondegreen” on an awed listener at the earliest opportunity.

Tried the Ridgeback today for lunch. Delicious and healthy crepes! It’s definitely going on our list of neighborhood places to visit often.

My husband and I went there last night and it was really smokey with no ventilation in the kitchen area. The food was good and I like the decor, but my clothes and hair smelled like smoke.

My wife and I have been making the long drive down to Georgetown (all the way from Sunset Hill) to visit Justin’s Hanger restaurant, and have been waiting anxiously for the Ridgeback Cafe to open. We’ve been three times now and everything is just as delicious as down South. The crepes are truly exceptional!