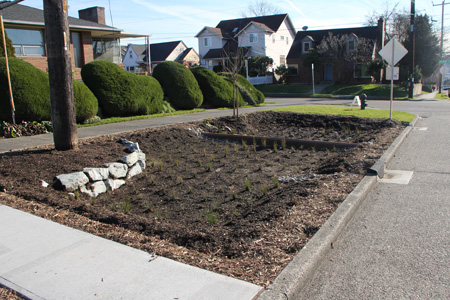 The problem, according to community members, is nearly half of the roadside raingardens don’t work properly. In the raingardens that don’t drain, inches of water will sit in the bottom for days after it stops raining. Andrew Lee the Combined Sewer Overflow manager for Seattle Public Utilities, acknowledges that there is a problem. “What we’ve seen is that some of these raingardens are not performing the way that the tests indicated they would,” Lee says. “They’re performing actually much worse.” The design standards call for the gardens to drain within 72 hours after the rain stops, a timeframe that some residents think is too long. 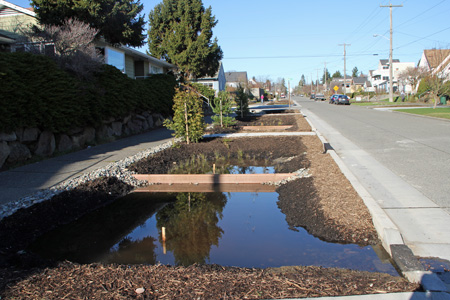 Nearly half of the roadside raingardens aren’t draining properly.

“We find ourselves in a difficult and surprising position with this project,” Nancy Ahern the Deputy Director of Seattle Public Utilities told residents. She says that Seattle Public Utilities has built successful raingardens in other parts of the city with happy citizens. That doesn’t seem to be the case in Ballard. “To be clear, we are very supportive of the raingardens,” Karrie Mathison said during a presentation by residents, “the point is we want them fixed.” 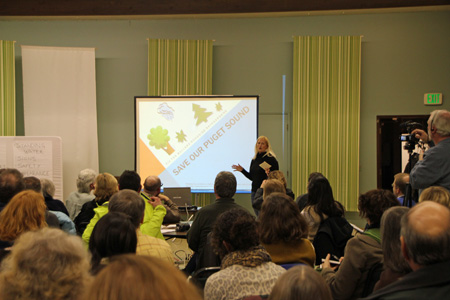 Residents put together a presentation for SPU.

During the two and a half hour meeting, many residents voiced their displeasure at many parts of the raingardens – the depth of them, the steep slopes, the standing water and the signage that the Seattle Department of Transportation requires. “We don’t believe that these are something that should be in our neighborhood,” one resident said, comparing the raingarden to a detention pond. 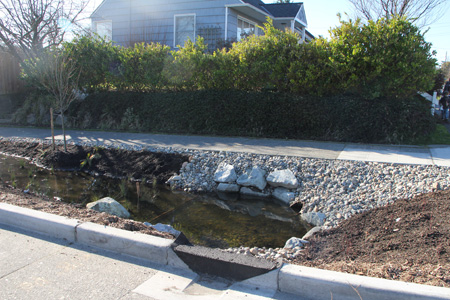 One of the raingardens with a steep slope.

A main theme throughout the meeting was the lack of communication between SPU and residents. “I would ask you, first of all, to be straight and honest with us as this develops and pay attention to the real needs of the community,” another resident told the contingent from SPU. That is exactly what SPU intends to do. “We are interested in partnering with the Ballard community,” Ahren tells us after the meeting. Within a week residents will get communication from SPU, Ahren says, and they will reach out to key leaders in the community to possibly create a task force. The plan is to work with the community to define what a successful raingarden is, she tells us. 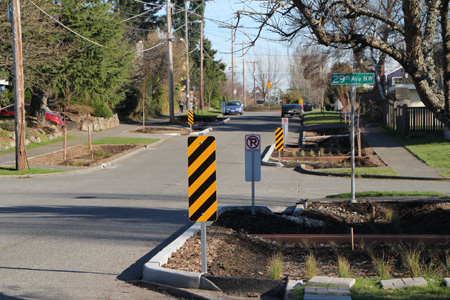 Signs required by SDOT for the “bump out” raingardens.

The first course of action for SPU is to address the standing water. “Our first objective is to get the non-performing rain gardens to drain so we don’t have the standing water,” Lee told the group. “We fully understand the safety concerns that people have.” The department will do a retrofit to the non-performing raingardens as soon as possible to get them draining, although this may not be a final solution. Ahren wants the community to have a voice in what that final solution might be. If the raingardens that aren’t working can’t be fixed, SPU is willing to take them out and restore the street to the way it was, Ahren said at the meeting. 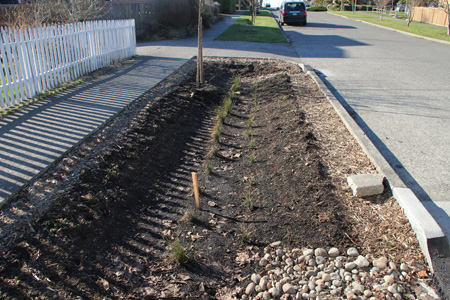 The roadside raingardens is a pilot project for SPU to create a solution for Ballard’s Combined Sewer Overflow issues. If this first project is deemed successful, other parts of Ballard may get these raingardens. You can read more about the project here.

The last photo is really the only one that shows any plants, and they do not appear to have matured. Could part of the problem be the fact that these are only a few months old and won’t work until plant material is established?

regarding the outrage over ‘retention ponds in my neighborhood’, maybe if you didn’t build 50% of your property with impervious surfaces, this wouldn’t be a problem. Although Seattle restricts building coverage, they do not restict impervious surfaces (driveways, patios, etc.) the way many other jurisdictions do. Maybe some more regulations regarding these standards would eliminate the need for a ‘retention pond’ on your street.

This is what taxes dollars are meant for….REALLY??????

Ugly mosquito breeding swamps that makes parking even harder? Sign me up!

Why not hand them over to the Department of Parks and let them run them as neighborhood pools?

First you pay someone to dig a ditch.

Then you pay someone to fill it in.

That’s about where 50% of your local taxes go.

DPD does restrict the percentage of impervious surfaces.

Ponds Cream – I am assuming that you do not live in the area where these “rain gardens” are. The houses and whatever is on the property were there before the “rain gardens” were dug! What you are saying makes no sense!
SPU have a good idea here and it does work, I have one on my street that was privately funded, but these gardens are not draining and the pools will cause a problem if they are not fixed.

as opposed to the standard practice of running clean rainwater through a sewage system causing it to overflow and pour sewage into the waterways?

Yes. You are absolutely correct. 50%. That’s why we don’t have police, fire, schools, public utilities, roads, parks, social services, etc. We’re spending billions to dig holes and fill them in.

These things are so unbelievably stupid and therefore so totally typical, civic Seattle.

I knew this was mostly about parking for people.

it’s not like you live in Manhattan or Capital Hill even–why do people think it’s so difficult to park around here? is walking a few hundred feet going to kill you?

where in the code book? do you mean King County’s code book?

what’s the limit then?

what you’re saying makes no sense.

do you think these houses were all built at once, with no additional development in the last 20 years? there is a reason the wastewater overflows happen more and more often, and it’s not just the weather. Between builders scooping up dumpy little houses and replacing them with ‘maxed out’ building footprints with two car driveways, and regular homeowners adding on, there is a huge increase in impervious area in this vicinity.

I do live in the area, and I dig these rain gardens.

Depends where you are in Ballard. There’s no good reason to reduce parking capacity. If you are asking me to walk a few extra blocks to accommodate some ugly enviromania contraptions because I dare own a car, then yes, I do have cause to object.

He was being Metaphorical.

50% of these ponds have 6-12 inches of standing water, all the time, until a truck decides to come pump them, which is maybe every two weeks. Pond scum is all over them – they smell – and kids are playing around them, so dangerous. These were built on top of clay soil – they won’t drain – they didn’t test it completely. Your tax money was wasted on this. The City has to fix it immediately – it’s so wrong.

I’d rather have this than sewage flowing into the Sound. They get this fixed with a little tweaking. This is the kind of stuff I want my tax dollars to be spent on…

Please figure out how to drain those pools! I was a huge neighborhood advocate prior to the project…talking up the neighbors and encouraging these things. Unfortunately, they do not reflect what we were promised. They are literally filled up to the brim with water….AT ALL TIMES. They are all “rain” and no “garden”.

I also don’t buy the “drain within 72 hours after the rain stops” criteria. We live in Seattle. I can’t remember a 72 hour period when it didnt rain.

Anyone with half a brain knows you need to perform a perc test before you put in a drain filed which is basically what these are. This very simple test would have shown what areas had enough of the right type of soil to allow the water to dissipate and what areas contained too much hardpan or clay for these to function or are located to close to the existing water table. Either these test weren’t performed or where done wrong.

Living near a creek that can flood in high rains I do like the idea of improving soil absorption opportunities but I think this could have just as easily been accomplished with small underground vaults rather than open pits. A vault would not impact parking, safety or property values the way these do but they don’t make for the great photo opportunities politicians love so.

what would grow in your ‘underground vault’? mushrooms maybe?
I don’t think they have quite the same filtering properties.

How many Ballard gardeners knew this wasn’t going to work BEFORE they put these in. Too much Kool-aid drinking and not enough critical engineering. Low Impact Design(infiltration) makes sense, but not every where. Reducing combined sewer over flows makes, but infiltrating in Ballard glacial till doesn’t. Bet folks would have signed up for disconnecting their roof drains with a little financial incentive from the city instead of these trip hazards.

Park your car in the garage. They city doesn’t owe you a spot in front of your house.

I was being facetious.