Just before 7:30 Wednesday evening, Seattle Police were called to a business on the 7500 block of 15th Ave NW, Detective Mark Jamieson with SPD tells us. 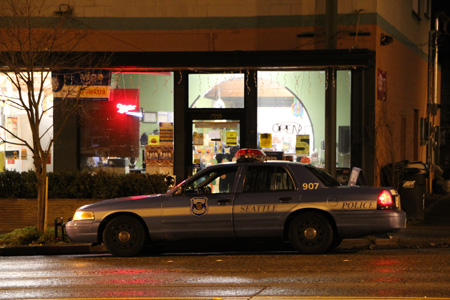 Jamieson says that two men armed with hand guns and wearing ski masks entered the store, robbed the clerk and fled. Police arrived shortly after the call was made to 911 but the suspects couldn’t be found. They are only described to police as Hispanic males, the victim couldn’t tell how old they are. There were no injuries, Jamieson says. The robbery unit will be following up on this and will look into whether the recent armed robberies are connected to this incident. (Thanks Silver for the tip!)

Would it be that difficult to get the name of the business before posting this story? Gold star reporting!

what business was this? I live on the 7500 block of 17th and I cannot figure out where this is from the picture. Can you please provide more details?