Ballard can expect a large influx of new residents in the next two years, according to Barry Hawley of Hawley Realty. At the Ballard District Council meeting on Wednesday night, Hawley said a number of new apartment buildings are going to be built in the area. 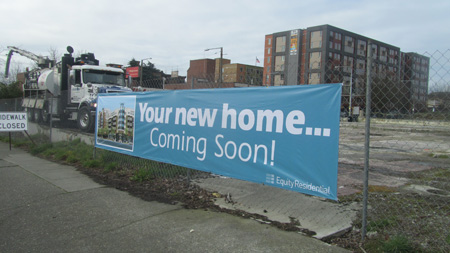 A new sign hanging on the fence at 15th Ave NW and NW Market St.

The old Denny’s and Sunset Bowl sites are both slated for apartment buildings.

“Ballard is going to be a real mixed-use area.  It makes you wonder where the commercial is going to go with this inundation of residential, and that will be interesting, in the coming years, to see what happens,” Hawley said.

“It’s been a tough recession,” he said.  But, Hawley said that Amazon’s move to South Lake Union will bring residents to Ballard, and that’s why so many developers are building here.

According to Hawley, Ballard is “lucky” for a number of reasons.  He said Swedish Hospital’s new addition makes it easier for residents to access daily treatments.  “I think this is a tremendous thing for the community,” Hawley said. He also said the industrial fishing community brings jobs to the area.

“The Ballard community is attracting young people and young families, with the best high school in the Seattle public school system.”

HUH? Am I the only one that thinks that doesnt seem right…..?

Rather bowl and get my grand slam, thanks

Good schools that are all over crowded more now then ever before.

Wahh! My neighborhood is chaaaaanging! Keep it the way it was! Wahhhhh!

Really? Isn’t it understandable that people miss the bowling alley and the Denny’s?

But you feel like mocking this sentiment as anti-progressive. Look, all change is not progress.

The only people allowed to complain about change around here are the Indians. Everyone else is just a tourist.

I totally read this at first as “Pirate development boom.” Oops.

Which of course has about as much cachet as saying you’re the best baseball team in Norway.

Good sure, open all night after a bender? Not hardly.

I like Barry Hawley. He is a stand up guy, but with all due respect, I think Barry is just falling to whatever interests that can make the most money for him in Ballard. I for one am sad that Ballard has become so condonized and has lost all of it’s history in the process. How many more condo developements do we need? So many now lay vacant. I’m sorry to see the blue collar flavor of Ballard and the craftsmans houses that I grew up with disappear. The history of Ballard is being buried by condos. Come on Barry…enough. You were a Ballard High graduate back in the day. Why aren’t you working on some historical preservation?

Hey, I bet the Indians miss their lifestyle too and I bet you and your blue collar ancestors didn’t care when you built cute craftsman, bowling alleys and diners on their land.

Guess what, the world doesn’t stop for you.

I beg to differ…The world does stop or at least cease to care when all we do is bury everything in a pile of highrise cement. I am sorry for what our forefathers did, but Kim can we do anything about that now? All we can do is try to do what we think is best now. Do you really think burying Ballard in high rise developement is what is best for us now?

Aside from the missing of the bowling alley and the denny’s-lovers out there, I am just wondering who exactly is going to live in all these new units – I can’t imagine everyone from Amazon rushing to move to Ballard. I’m pretty sure the ugly-boxy stuff east of 20th is still fairly vacant and I know the building I live in a few blocks away always has at least one vacant unit in it…I see lots of vacant signs while driving around. On top of that, the idea that all this development is going to create a “real mixed-use area” or whatever was mentioned in the article seems a little questionable to me too. There is SO much over-priced retail and commercial space available already in Ballard. Do we need MORE vacant store-fronts when the businesses that are here now are often struggling to stay alive? My guess is that it will take years and years for the demand to meet the capacity that is being built. I’m not a bowler and in all my years living here I never set foot in Sunset Bowl, but every day I drive by that vacant spot, I am sad and wish they… Read more »

You misunderstood him. Barry is a commercial realtor, he does not want Ballard to become a bedroom community. The more multifamily units the worse it is for his business. He is concerned that condos and apartments will force commercial building tenants to leave the area.

Yes and you can’t stand on the Ballard Bridge and watch the logs go up the chain thing_ie into the plywood mill anymore. This place sucks.

“a real mixed-use area” – we see vacant retail and commercial space now and adding to the glut will hopefully force property owners to lower rents, which can lead to a resurgence in small businesses in the ‘hood.

yeah yeah – call me Pollyanna but it makes some sense…

It is mixed use: you get a nail salon AND a dry cleaners!

I don’t know about all of you, but I’m still waiting for the mass transit that was the original reason all these high rise condos were permitted to be built.

Hear, hear. I commute from Ballard to South Lake Union, myself. Most of the time I bike, but I take the bus about once a week.

There’s an inevitable lag between an increase in ridership and any kind of response. I can’t imagine what the 17 is going to be like for a couple of years if we have hundreds of people moving in and making that commute.

On the other hand, yuppies are the kind of people who are likely to kick up a fuss and get the city to build some transit, to the extent that anyone can.