Despite falling on a Tuesday evening this year, thousands of Seattleites packed Ballard on a sunny May 17th to enjoy the annual Syttende Mai Parade.

Organizers say it’s the largest parade so far — 3,000 people walked, drove and rode the route as part of 94 entries. Running a full two hours, organizers believe it may challenge Seattle’s annual Torchlight parade as one of the city’s largest. The 17th of May has been celebrated in Seattle since 1889 and for many, this is a tradition they don’t miss. “It’s something we do every year because it’s part of our heritage to be involved in the 17th of May.” Ballardite Liv Faris says. “It’s the best thing we can get outside of Norway.”

“I remember coming to this parade when I was a kid” says Kelly Lambson. “It’s great to see everybody coming out and celebrating.” 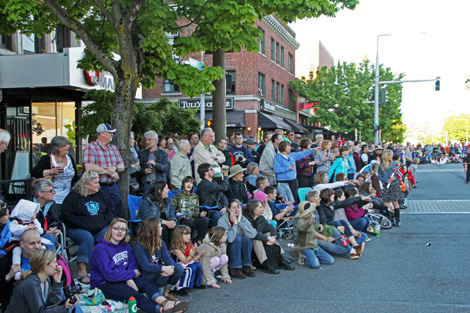 The crowd wasn’t quite as large as the years when May 17th falls on the weekend, but it was impressive, nonetheless. A small handful of people even camped out along 24th Ave. as early as noon. 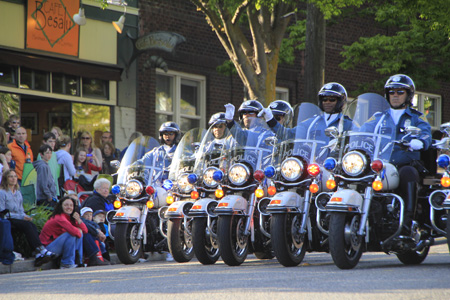 The Seattle Police Motorcycle Drill Team kicked off the parade, dazzling the crowd with their precision moves while clearing the roadway. 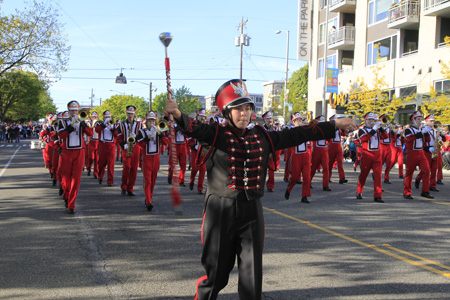 The first band out of the gate was none other than the Ballard High School marching band. 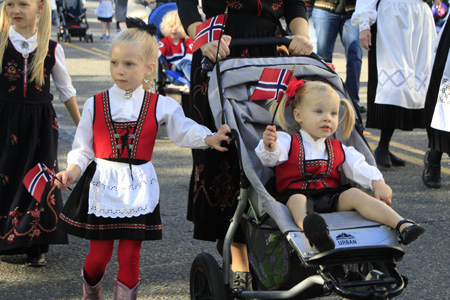 The kids are always a crowd favorite. 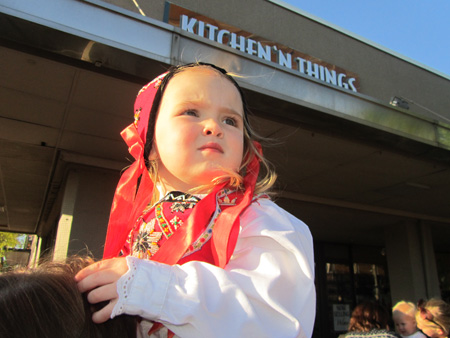 “She was excited to wear her bunad,” Faris says of two-year-old Landry (above). “This was my bunad when I was two so it’s just really cool to see her in it.” 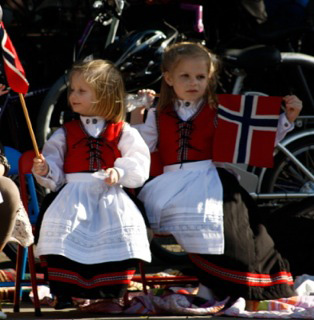 Erin Snow sent us this photo of two little girls dolled up in their bunads. Another crowd favorite was the Ballard High School Robotics Team with their robot, who was stopping every so often to show the crowd its abilities. 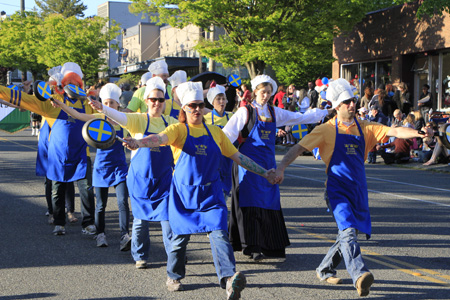 Not to be outdone be the sea of Norwegian red, the Swedish Pancake Drill Team made its annual performance, complete with a man dressed as a pancake who high-fived the kids along the route. 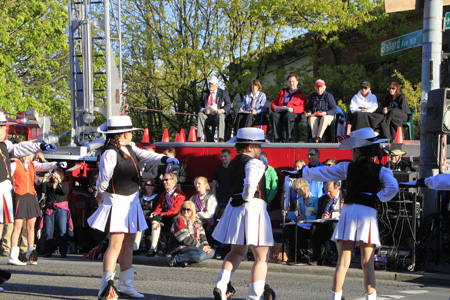 Of course the judges had the best seat in the house. Each group stopped to perform for them. Overheard on the opposite side of the street, “We sure picked the wrong side to sit on.” It seemed that not a kid at the parade was sitting down. They were all in position for one thing – candy – and there was lots of it. Even the dogs were feeling a bit Norwegian for the day. And of course it wouldn’t be a Ballard parade without the unicycles. Here are a few Whittier Wildcats on their decorated cycles.

Makes me feel proud to be Swedish. And makes me want to live in Ballard. Makes me HOPE that my daughter Megan attended this parade today! Smooch!

i do think that the LGBT pride parade is more of a challenger to the torcglight parade, in number of participants, length, and audience size.

Ah, good point, we adjusted the story to say “one of the city’s largest.”  Thanks for pointing that out.

THis parade was on a monday last year not a weekend.

The Swedish Pancake Drill Team was my favorite this year.  My second favorite was the kids on the tall unicycles with the white balloons on their heads.

Did you get a pic of Queen Anne Elementary’s unicycle team? It was their 1st-ever parade!

Great fun this year. A bit breezy but sunny! This parade seems to get better and better every year.

I would like to see the parade start a block or two farther north so that the procession would pass Gopper Gate and the Viking, providing a few more places (and the only two with a Scandinavian theme) to have a drink while watching the parade.

This was my first year in Ballard for the parade.  What a thrill it was to march in it with the people from the Scandinavian Language Institute and the Nordic Heritage Museum.  And then to join the Whittier Wildcats to be with one of my granddaughters on her unicycle.
Janet

My daughter was one of the Whittier Wildcat Unicyclists! It was her first time in a parade and she was so so so so proud and excited!  It was fun to watch everybody and feel like a kid again!