Each day parents, kids and staff at the Ballard Boys and Girls Club (1767 NW 64th St) cross 20th Ave NW at NW 64th St. The problem, according to Executive Director Mark Hendricks, there is no crosswalk.

“To help with parking the club rents the parking lot from the Baptist church,” Executive Director Mark Hendricks tells us. “For our young members and families that means they have to cross 20th Ave which I have been told for years from the city staff that they cannot put in a crosswalk.” 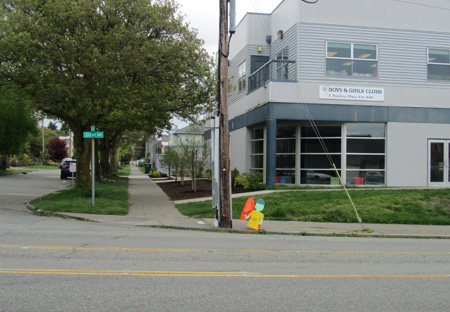 In order to make the families and staff more visible, Hendricks says they’ve come up with somewhat of a solution. “We have placed our own little plywood kids that hold the orange flags for people to use when they cross the street currently,” he says. (Pictured above.)

Now the Seattle Department of Transportation is planning to do a study at this intersection. As part of the changes coming to 20th Ave NW, which includes removing the center lane and adding bike lanes, SDOT is also going to make some pedestrian improvements.

Besides the crosswalk study, pedestrian improvements on 20th Ave NW include:

Marybeth Turner with SDOT tells us that the final decision on the crosswalk at NW 64th St will be made after the study is complete.

Hendricks believes a crosswalk is a step in the right direction. “Anything we can do to minimize the chance of any children being hurt is our highest priority,” Hendricks says. “A crosswalk will not guarantee that no one is hurt crossing a street but I would hope that drivers are just a little more careful and slow down when pedestrians are present.”