For the last couple of years, a pair of Osprey have been nesting on the railway bridge just west of the Ballard Locks. According to neighbor Shannon, the nest was taken down last year because there were plans to remove the south tower where the nest was. The plans didn’t move forward and after a nice winter away, the Osprey are back. 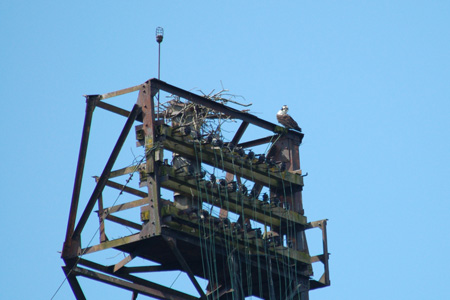 According to Shannon, the first Osprey returned on April 12th and started rebuilding, the second arrived a couple of days later. “They have in the nest for a month now and may have chicks, but I cant see,” she says. (Thank you Carey Aron for sending the photo taken by Marilyn!)

6 thoughts to “Osprey are back nesting atop the railway bridge”