As the Seattle All-City Band gets ready for a summer full of performances in Seafair parades and other community celebrations, they are also on the lookout for alumni. 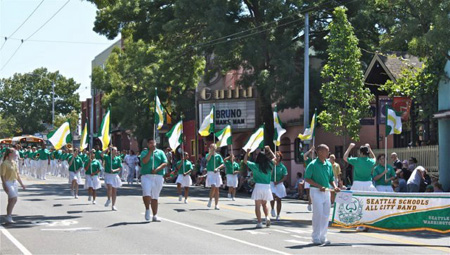 The All-City Band performing in the Wallingford Kiddies Parade

This year marks the 60th year for the band! To celebrate, they are looking for enough alum to make up a separate band. “We hope to find enough alumni members to have a separate alumni band, which is quite an undertaking,” said Marcus Pimpleton, director of the group. “I think it will be a great experience to have our newest members and those who haven’t played in decades performing in tandem.”

The All-City Band, which is comprised of musicians from throughout the city, was founded in 1952 and is the longest continuous entrant in the Seafair Torchlight Parade. They have also won countless sweepstakes awards in the region’s parades throughout their history.

We’re told that many of the band’s members and former members went to Ballard and Roosevelt High.

Near the end of the summer, the Friends of All-City Band organization will host a commemorative banquet to honor the band’s storied history, celebrate the impact of the band on its students and the community, and to bring together former members of the group. There will be a silent auction component to the celebration, as the organization hopes to raise money for new percussion equipment, travel costs for the band’s parades outside of Seattle, and scholarships for students in need.

The banquet will be held on August 5th at the Brockey Center on the South Seattle Community College campus. Tickets are available here. Alum are encouraged to submit their contact information and learn more about the alumni band by emailing allcitybandalumni@gmail.com