The most recent appeal filed to stop the “missing link” of the Burke-Gilman trail has failed. According to our news partners, the Seattle Times, a hearing examiner denied the appeal, stating that the completion of the multi-use trail does not pose a significant environmental risk. This means that the city will not have to conduct a full environmental impact report, the Times is reporting. 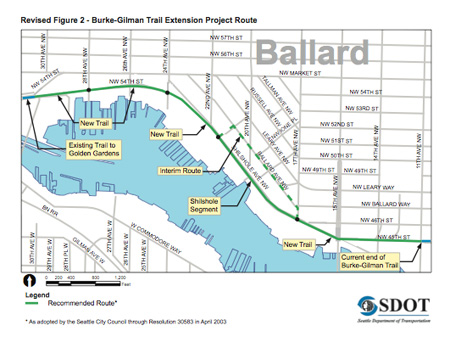 The attorney for the Ballard Business Appellants, Josh Brower, tells the Times, “Until the city proposes a safe facility that doesn’t threaten the maritime and industrial facilities that provide family wage jobs to middle-income people, my clients have no choice but to continue to oppose the ‘missing link’ trail.”

This appeal came on the heals of the completion of an environmental review ordered by King County Superior Court Judge Jim Rogers. That report (.pdf) concluded that the “missing link” will “not have a probable significant adverse impact on the environment.”

The group has 21 days to appeal the hearing examiner’s decision. “We do fully expect that this will once again be appealed to the King County Superior Court, however the city is eager to begin construction on a fully funded and fully designed ‘missing link’ segment,” Rick Sheridan with the Seattle Department of Transportation tells the Times.

“I think we’re disappointed and continue to be concerned about the parking situation in particular,” Williamson Miller says. The Chamber of Commerce originally joined the legal battle because the current design for the “missing link” will take parking away from Shilshole Ave.

“I don’t know where things will go,” Williamson Miller tells us. “It is kind of frustrating at a certain point. I certainly understand we need alternative transportation, but does it have to be everywhere? There should be a transportation plan for it.” Williamson Miller says that they are working on a “cycle track” solution for the Burke Gilman Trail – one that will take bicyclists through the business district and not affect the maritime industry.

You can read more from the Seattle Times here.