A streetcar for Ballard? It’s a possibility – My Ballard Skip to main content

The city’s new Transit Master Plan, which is a blueprint for the city’s transit planning for the next 20 years, was presented earlier this week to the City Council’s Transportation committee. 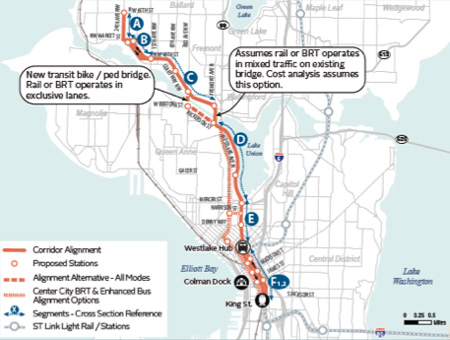 A look at the corridor from Ballard to downtown.
In the report, Ballard to downtown is highlighted as one of the main corridors to explore new transit options – including rail. “A streetcar line from Loyal Heights to downtown, via Ballard and Fremont, would best serve a high demand for transit in that corridor, according to the report,” the SeattlePI.com states.

According to the SeattlePI.com:

The 7-mile Ballard corridor conceivably would have eight stops, serving Loyal Heights, Ballard, Fremont, South Lake Union and the King Street Station downtown, according to the plan. It’s estimated to draw 26,000 daily riders in 2030, which would be the highest ridership of all the proposals.

The cost to build the streetcar line would be about $327 million, which assumes the streetcar line would be in the public right-of-way, not on property that the city would have to buy. One of the alignment alternatives includes building a transit, bike/ped bridge over the ship canal at 3rd Ave NW, which the SeattlePI.com says would be about $70 million, as opposed to the $10 to $12 million for retrofitting the Fremont Bridge.

I took a day off today I kicked off my own veoirsn of Cycling Weekend. I took the single speed out for a 49 mile tour of Iowa’s hills.Never, ever, ride Old Lincoln Highway, at least not during the week! Bryan R. helped me get back to CB safely via a calmer, hillier road.Miles might be planning some kind of ride this weekend. I haven’t seen any details at Munson’s blog yet, though.