The much-anticipated re-opening of Bad Albert’s is just around the corner. 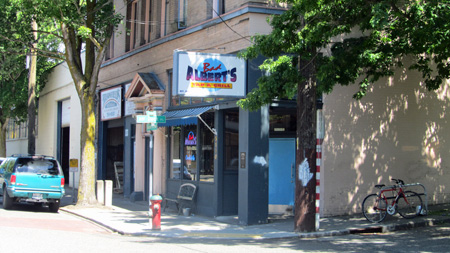 The new owners of the 17-year-old pub are lifetime Ballardites, twin brothers Shawn and Cory Rockey. They tell us that they’re currently putting the finishing touches on the place and hope to have the soft opening as early as next Tuesday. A grand opening party is planned for the weekend after Halloween.

During the three-month closure, Shawn tells us that they’ve added new taps, including a red wine and white wine tap, and will have cold beer – really cold beer. “We’re hoping to have some of the coldest beer in Ballard,” Shawn says. There will also be a new focal point to the bar – the actual bar. Shawn and Cory’s dad is a master woodworker and is coming in to make the new bar. “That’s kind of exciting because that will be a huge focus of the bar itself, which it never had.”

While a lot has happened cosmetically, not much else has changed. The menu will look almost identical, although a few items will be switched out and the faces will remain the same. The entire crew, from the waitresses to cooking crew is coming back.

The former owner, Steve Katsandres, closed Bad Albert’s in July. “When there was talk that he was going to be closing it up, we definitely put our names in the hat to buy it,” Shawn says. “After a few different people, he wanted to work with us and it worked out.” Katsandres is a big support for the Rockey brothers, even though they have their own vision for the place.