Updated: Owner Justin Cline tells us that the health inspector won’t be out until Monday or Tuesday. The tournament will still go on this evening at 6 p.m. with refreshments – no ice cream. 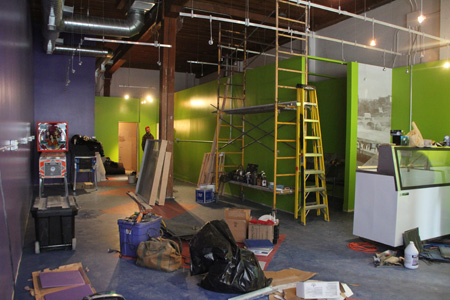 Known for its natural homemade ice cream and pin ball machines, this is Full Tilt’s fourth location – with other shops in White Center, U District and Columbia City. Although the place looks a bit unorganized at this point and not all the machines have been delivered, the owners plan on opening tomorrow. This will be Full Tilt’s largest location with more seating and 15 pinball machines. They also serve canned and bottled beer, their liquor license doesn’t allow for anything else.

For the grand opening on Friday they are hosting a pinball tournament celebrating the release of the new “Transformers” pinball machine. In fact, Full Tilt will have three of those machines for customers. Party starts at noon.

On Saturday November 12th, bring the kids for a free performance at 3 p.m. by the recently featured The Not-Its.