Anika Anderson, a student at West Woodland Elementary school, was awarded a Norwegian fiddle for one year. Anika is the first recipient of the Young Student Hardanger Fiddle Loan, which was presented by the Hardanger Fiddle Association of America. 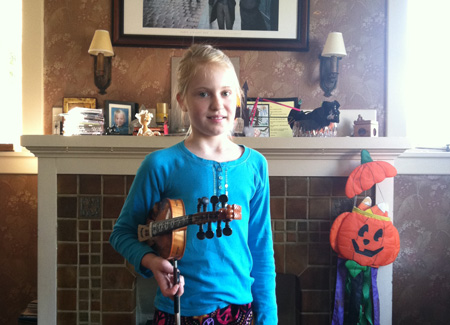 The 11-year-old developed an interest in Scandinavian music at an early age. Growing up in a musical household Anika started taking lessons when she was seven. In 2007 she had the opportunity to play the hardanger when her violin teacher, Martha Levenson, shared the instrument.

Anika received her own hardanger in January after applying for the loan last October. Anika’s mother, Debbie Anderson, says that very few people are skilled in the hardanger and that even in Norway child-sized versions of the instrument are difficult to find. The rare child-sized instrument was made in Oregon.

The hardanger is more delicate than the violin and has four additional strings. When Anika received the instrument she started taking lessons with Peter Michaelson, one of the few Seattle musicians familiar with the hardanger. Anderson says that the unique opportunity has broadened their perspective of Norwegian music.

Hear more from Anika and listen to her play.

Anika has taken advantage of the opportunity, performing at local shows and in other states. In the Summer she visited Wisconsin on a tuition scholarship, where she attended the HFAA annual workshop. She also performs with the Seattle Lilla Spelmanslag, a group of young musicians who play traditional Scandinavian music.

Although Anika’s time with the small instrument is nearing an end, she hopes to own a regular hardanger one day. Anderson says she’s proud of her daughter’s accomplishments and will continue to support her in the future.

“I’m very proud of my daughter, but most of it has been her motivation,” she said. “It’s what she’s wanted to do.”