A Ballard love story, circa 1892 – My Ballard Skip to main content

Love before Twitter, texting or email was a lot different. Instead of the instant gratification of an immediate response, love birds in the 1890s would have to wait days or weeks to hear back from someone. 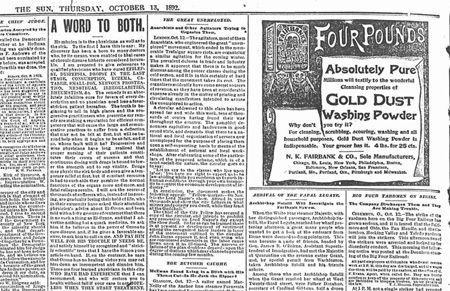 Here is a love story that ends right here in Ballard published in The Sun on October 13, 1892:

A NORTHWESTERN ROMANCE
A Husband and Wife Reunited After a Search of Five Years
From the St. Louis Globe-Democrat

SEATTLE. Wash. Oct, 8—A romance in real life has just come to light in Ballard, and the ending is a happy one. Five years ago, Mr. and Mrs. H. G. Baker lived on a farm about twenty miles south of Bismarck, Dak. They had been in the country but a few years and spoke English imperfectly. They were thrifty and had a fine place and were fairly prosperous. The country did not suit them, however, and Mr. Baker started for California to look for a new home, intending to send for his wife as soon as he found one. Before leaving he made arrangements by which she could dispose of their property without delay. He had been gone but a few weeks when Mrs. Baker received a letter one day from a friend that Mr. Baker had died in California. Mrs. Baker, believing this story, at once sold the farm and stock, and with several thousand dollars came to Washington to make her home. She finally located at Ballard.

Mr. Baker wrote to his wife about the very time she was on her way west. After the usual delay the letter was returned with the indorsement: “Removed: present address not known.” A letter to the Postmaster brought him the explanation that his wife, believing him to be dead, had sold out and moved away, no one known whither. Mr. Baker could speak but very little English and had made no acquaintances to whom she could tell her plans. All the neighbors knew was that she had sold the place and gone away with the children; and they all felt sorry for her because she mourned so for the death of her husband. Then, and for five long years thereafter, Mr. Baker began and continued his search for his wife and children, whom he at last has just discovered at Ballard. He was greatly handicapped in his search by his imperfect knowledge of the English language and his ignorance of the ways of doing business in this country.

A year ago Mr. Baker in his wanderings came to Ballard from Snohomish, where he had been following a clue t o his wife’s whereabouts, for he had by this time assured himself that she had come to this State and was living on Puget Sound somewhere. He dined at a hotel almost within speaking distance of his wife and children, never once dreaming they were so near.
A short time ago Mrs. Baker sent a picture of herself and children to Mr. Baker’s parents in the old country. They sent word to their son, and he at once hastened to the side of his lost wife, and a joyful reunion took place. Mr. and Mrs. Baker are a prepossessing couple and now live in a cosey little home on the east side of Ballard. They have an interesting family of three bright boys, aged 6, 8, and 10 years. The last time Mr. Baker saw his youngest boy he was an infant nursing in his mother’s arms, and when he saw him here he was wheeling a barrow of wood for his mother. Mr. Baker’s face beamed with happiness over the fortunate ending of his wanderings as be told his story to a reporter last night

You can see the actual clipping of this story here (.jpg). (Thank you Cristin for finding this and transcribing!)