If you were at Shilshole or Golden Gardens this evening, you may have noticed a Greenpeace ship, the Esperanza, floating around the opening to the canal. They’ve been in Seattle for the past few days in order to, “expose Shell’s attempts to begin destructive drilling in the pristine Arctic Ocean,” as Greenpeace told the West Seattle Blog. 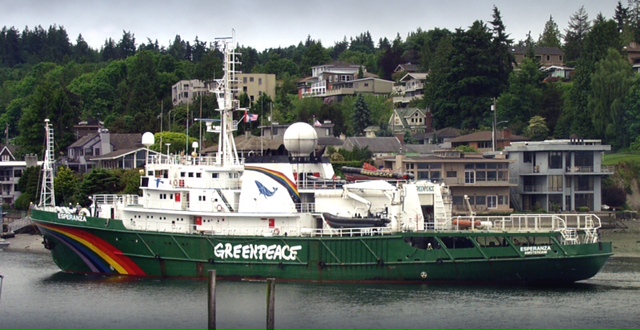 Greenpeace told the West Seattle Blog that they plan to use Esperanza to follow Shell’s ships to Alaska, where Shell plans to begin drilling:

Greenpeace is launching its “Save the Arctic” ship tour just as a new Alaskan oil rush begins. The Esperanza will sail along the Pacific Coast, shadowing Shell’s drilling vessels, the Noble Discoverer drillship (built in 1966) and Kulluk platform (1983), as they enter one of America’s most fragile and unknown ecosystems.

Esperanza was scheduled to pass through the Ballard Locks at about 7:30 p.m. tonight (Thursday), likely headed for the Northlake Shipyard, according our tipster Ron Lloyd.