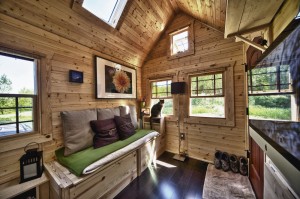 Bothell residents Andrew and Kelsey Mooseker are currently building a “tiny” house and are looking for a place to permanently park it in Ballard. They want to return to Ballard in their newly constructed home, when it is done in July, after regretting their move to the “un-walkable suburbs”.

Their “tiny” house will be roughly 8 x 20 feet and will include two loft sleeping areas; one for the couple and one for their 4 year old daughter. They are building it based on the plans (pictured) found on The Tiny Tack House website.

The young family want to be close to all the action in our neighborhood and to Andrew’s work in Ballard. “We’re hoping this downsize will help us live more intentionally and simply while allowing us to spend more time as a family – the commute for my husband from Bothell to Ballard is brutal,” said Kelsey Mooseker.

My Ballard reported a similar story back in 2009 when Jeff and Arlene were looking to find a local spot for their tiny home. They were successful in finding a spot and have been living there ever since. They have continued to post on their blog and Jeff reported in August last year that “they both still live happily together in the house.” “A by product of down-sizing is that I have less stuff to distract me, which has meant that I have more focus that I can apply to things that are important to me,” wrote Jeff.

The Moosekers are hoping for similar successes with their “tiny house” plans. “We’re doing it because my husband is turning 30 in April and the thought of being “grown up” has really prompted us to figure out what’s really important to us,” said Kelsey.

If you know of a great spot for the Moosekers to park their home contact them at kelsey.mooseker@gmail.com

Do you live or know of a family living in a “tiny” house in our neighborhood? Drop us a line at tips@myballard.com with any advice for the Moosekers on their new venture.