The Hiram M. Chittenden Locks Cavanaugh House just turned 100 years-old. Built in mid-1913 and formerly known as the Lockkeeper’s House, the Cavanaugh House was built in 75 days at a cost of $7,840, and was the first completed structure of the Lake Washington Ship Canal. 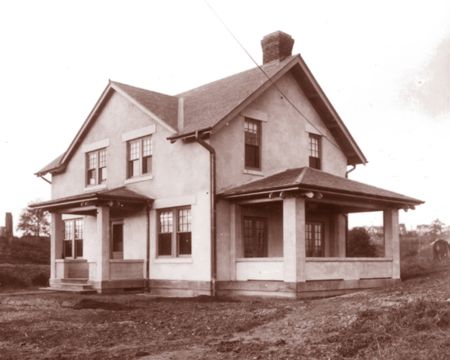 The house was originally built for the Lock’s electrician in order to keep an eye on the the locks around-the-clock. The name was changed in 1967 and dedicated to Col. James B. Cavanaugh, the Seattle District Engineer who oversaw the Lake Washington Ship Canal construction in 1911.

Here’s a history of Cavanaugh, from the Army Corps:

Cavanaugh graduated first in his class from the U.S. Military Academy at West Point in 1892 and served in a variety of technical and tactical assignments, starting with Michigan’s Soo Locks expansion from 1895 to 1897. He served in the Philippines for a year during the Spanish American War, commanding three engineer companies that built many ports, roads and bridges.

“The next 10 years and four assignments, Cavanaugh taught or practiced engineering, preparing him for construction of the largest locks north of Panama, a remarkable feat in that day,” said Seattle District Commander Col. Bruce Estok.

While the house and landscape has undergone some changes, the original character of the home has been maintained. Any work now performed must comply with historic property law, as the Locks, canal and structures constitute a National Historic District and are listed in the National Historic Register, according to the Army Corps.