Skillet Diner appears to be close to opening at their new location in Ballard at the Greenfire Campus (2034 NW 56th St). Skillet is owned by Joshua Henderson, who also runs the popular Capitol Hill location. It’s classic-diner-meets-street-food, as they also have a roaming food truck that sets up shop around the city. 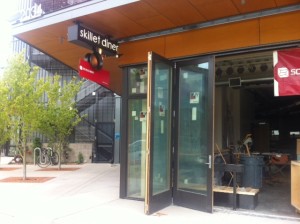 Skillet will offer breakfast, lunch and dinner, with options such as poutine, pork belly & waffle, cheddar cheese grits and burgers. Henderson believes his restaurant will fill a need in Ballard, telling Seattle Eater that there isn’t much competition in Ballard when it comes to the type of food on his menu.

We called the Capitol Hill location, who told us they plan to open within the next couple weeks. Our tipster Silver sent us the above photo, which shows they’ve hung their sign and are clearly building out the interior of the restaurant. It’s meant to be bigger than the Capitol Hill location, offering seating for 100 and bar seating for up to 20. And, they could be offering patio seating in the future.

We’ll tour the new diner and post pictures closer to their opening, so stay tuned. Keep up on their progress on their Facebook page.